A Brief History of Celebrating Thanksgiving in Space 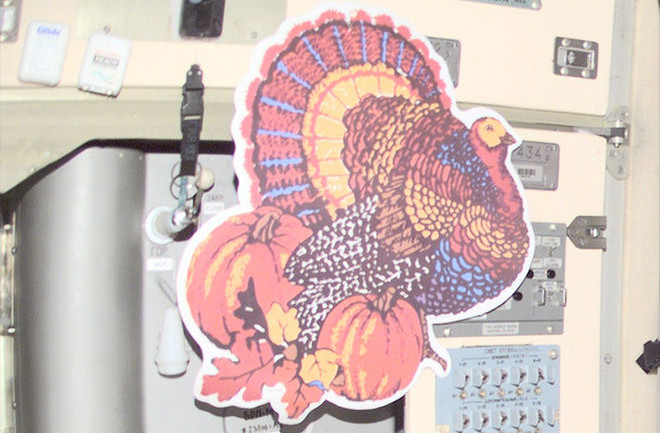 A turkey adorns the interior of the International Space Station. (Credit: NASA) Nothing puts the concept of "thanks" in perspective like floating in a tin can, high above the world. Not only do astronauts in orbiting space labs get to dine in zero gravity, they're treated to an unrivaled view: the bright blue marble that supports and sustains us. Celebrating in space comes with some limitations, of course. The food is all freeze-dried or thermo-regulated, and forget baking a turkey in the oven. Still, space residents do the best they can preparing a special menu, inviting their foreign companions to dine with them, and even treating themselves to some football piped in from mission control.

Plenty to Be Thankful For

The first space-based Thanksgiving celebration dates back to 1973, when astronauts Gerald Carr, William Pogue and Edward Gibson feasted aboard NASA's Skylab - following a 6-hour space walk. Since then, whenever Americans have been in space for the holiday, there's been some sort of special treat. In 1985, aboard a shuttle mission, irradiated turkey was on the menu. Astronauts and cosmonauts aboard the Columbia shuttle and the Mir space station joined together to celebrate during the 1990s. And ever since the ISS received its first crew in 2000, there have been astronauts present to observe a day of thanks in space.

Ten astronauts float around a small table for their Thanksgiving day meal aboard the International Space Station. (Credit: NASA) Though it may come in a portion-controlled, irradiated, foil packet, the astronauts are treated to smoked turkey, mashed potatoes (no gravy, unfortunately), candied yams, green beans, cornbread dressing and occasionally a special dessert brought by newcomers to the station. Astronauts hook their packets up to a special machine to rehydrate them and create something that's edible. By all accounts, the food tastes pretty good, although eating in zero-gravity presents its own problems — instead of spilling gravy on the carpet, astronauts have to worry about their stuffing escaping and hitting them in the eye.

Opportunity to Be Together

Thanksgiving offers a break from the strict routine aboard the space station, and builds camaraderie. "Blueberry-cherry cobbler, compliments of our guests, and served on a tortilla was a real dessert treat for the station crew, since that was not included in our meal rotations," wrote Expedition 5 NASA ISS Science Officer Peggy Whitson, according to NASA. "Celebrating this holiday in space with some visiting friends was a very special experience, one that I will remember fondly in Thanksgivings to come." In their yearly recorded holiday greetings, NASA astronauts seem grateful for the opportunity to celebrate aboard the station, and stress the importance of working and sharing traditions with their international co-workers on the ISS. NASA has even shared their cornbread stuffing recipe, although they warn that it may come off a little too flavorful for us here on Earth, a consequence of the flavor-depleting nature of the freeze-drying process. In 2015 commander Scott Kelly and flight engineer Kjell Lindgren recorded themselves trying out some of the freeze-dried delicacies, which included a (very small) helping of smoked turkey and some candied yams. https://www.youtube.com/watch?v=3XQchueaE6k This year, astronaut Shane Kimbrough talked us through the meal he plans on preparing for the six inhabitants of the station, including a special helping of iced tea for the Georgia native. https://www.youtube.com/watch?v=WcsuOo0GgoU