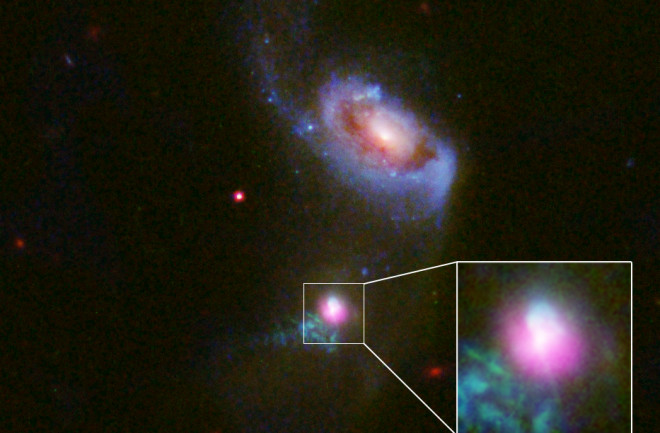 The galaxy SDSS J1354+1327 (just below the center of the image) hosts a supermassive black hole that has let out two "burps" in the past 100,000 years. The older burp can be seen to the lower left of the galaxy as a diffuse, blue-green glow. The more recent burp appears as a bright blue-white arc to the upper left of the galaxy's center. Its companion galaxy, SDSS J1354+1328, lies just above the center of the image. (Credit: NASA , ESA, and J. Comerford/University of Colorado-Boulder) Supermassive black holes reside at the center of most, if not all, massive (and possibly low-mass) galaxies. They range in size from millions to billions of solar masses, and they can eat voraciously or not at all, depending on their surroundings. But one thing is clear: Black holes don’t have very good table manners, as a team led by researchers at the University of Colorado Boulder confirmed last week at the 231st Meeting of the American Astronomical Society in Washington, D.C. The team caught a supermassive black hole in the galaxy SDSS J1354+1327 (or J1354, for short) with a history of “snacking” on material in its vicinity, then letting out “burps” of energy as a result. In between meals, the black hole is relatively dormant. That dormant period lasted about 100,000 years, which is an eyeblink on cosmological timescales, but certainly not for humans. The work, presented at the Washington, D.C., meeting by Julie Comerford of the University of Colorado and published November 6 in The Astrophysical Journal, identifies two separate burps, or outflow events: one ancient burp on the verge of dissipating and one hinting at a much more recent meal. It is the first time two separate events have been identified for a single galaxy.

J1354 is a galaxy identified in the Sloan Digital Sky Survey; it sits about 800 million light-years away. Astronomers imaged J1354 in X-rays and optical light using the Chandra X-ray Observatory, the Hubble Space Telescope, the W.M. Keck Observatory, and the Apache Point Observatory. By combining the data from these different images, they spotted a large, diffuse “cone” of gas extending 30,000 light years below the bulge of the galaxy (where the supermassive black hole is located). This gas is ionized — meaning its atoms have been stripped of their electrons — by a huge burst of radiation from the supermassive black hole that occurred about 100,000 years ago.

To the north of the black hole, astronomers saw a shock wave propagating through the gas from the black hole, already at a distance of 3,000 light-years from the black hole. This burp is from a second, more recent meal the black hole consumed. Between the two events, the black hole was likely much more dormant — expected behavior for such objects, which, according to Comerford, go through a cycle of snacking, burping, and napping, then snacking and burping again. An additional piece of the puzzle falls into place as one zooms out on the images of J1354 — the galaxy is located near a second, companion galaxy, which likely interacted with it in the past. The collision between the two galaxies then funneled material in toward the supermassive black hole and provided those large meals that prompted the burps.

If you think this burping behavior is unique to distant (or other) galaxies, think again. This behavior is thought to be common for black holes, which should “flicker” on and off on 100,000-year timescales many times over the course of their existence. But while catching a single event isn’t necessarily rare, identifying the remnants of two past meals has never before happened. “Fortunately, we happened to observe this galaxy at a time when we could clearly see evidence for both events,” said Comerford in a press release. The Milky Way’s supermassive black hole, now in its “napping” phase, has also gone through this cycle. Its most recent burp can still be seen today as two bubbles of gas extending above and below the galactic plane, called the Fermi Bubbles. These bubbles were spotted in 2015 by NASA’s Fermi Gamma-Ray Telescope, and are remnants of a meal our black hole consumed between 6 and 9 million years ago. Right now, both J1354 and the Milky Way’s supermassive black hole are experiencing what Comerford calls a “galactic food coma.” But that may change — “Our galaxy's supermassive black hole is now napping after a big meal, just like J1354’s black hole has in the past. So we also expect our massive black hole to feast again, just as J1354's has,” said Scott Barrows of CU.