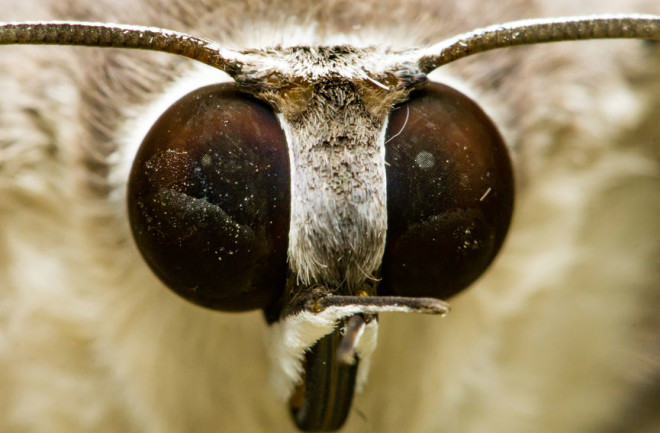 A close-up of moth's eyes from order Lepidoptera. (Credit: Muhammad Naaim) Moth eyes and lotus leaves may be important to the future of touch screens. Researchers from the University of Central Florida and National Taiwan University designed an anti-reflective coating that was inspired by moth eyes. The coating reflects about 10 times less light than the best anti-glare technique in commercial use.

The ability to see your phone’s display is a competition between display brightness and reflected ambient light. Relying on extra bright screens to outshine reflected light costs battery life. Another solution is to reduce ambient light by shading your phone, but that’s not ideal either. Convenience, notes research associate Shandon Hart at Corning Inc., is not the only consideration. “When you're in a car and you've got glare coming off your display or your dashboard, that can actually be a safety issue,” he says. Anti-reflective coatings are designed to capture as much ambient light as possible; any light not captured gets reflected back producing a glare. In 2015, DisplayMate Technologies determined the iPad Mini 4 anti-reflection coating was the best on the market, reflecting just 2 percent of ambient light. The moth-eye anti-reflection coating, however, reflects just 0.23 percent of all incoming light. So how did they do it?

A close-up of a moth's eye looks like a dense, meshed screen. They're dark, absorbing as much light as possible to reduce any glimmer that would betray their location to a predator. This is achieved through nanoscopic pockmarks in the surface, which effectively creates a gradient change in index of refraction from air to glass.

(Credit: Guanjun Tan) “We first make a template with nanoparticles of silicon dioxide,” says Shintson Wu, professor of optics and photonics, and principal investigator of the study, published Thursday in the journal Optica. “[The nanoparticles'] diameter is about 100 nanometers, and the gap between the particles is about 10 nanometers.” For scale, red blood cells average around 7,500 nanometers in diameter. The sheet of nanoparticles is then pressed on to the screen surface, leaving behind tiny, spherical wells.

The substrate was also designed for flexibility. “The future for displays is flexible displays,” says University of Central Florida professor Lei Zhai. In practice, this comes at a cost to coating hardness. Hart says the demonstrated hardness “would not be sufficient” for pocket devices that are likely to come in contact with metal keys, sand, or other rough materials. Wu says modifications to material concentrations will increase hardness, though at the expense of flexibility. Another bio-inspired feature of Wu's design uses Wilhelm Barthlott's lotus effect. “The lotus leaf has a self-cleaning effect because the surface is hydrophobic. So we do the same,” he says. Maximizing hydrophobicity minimizes dirt’s ability to stick to a surface. Lotus leaves achieve this using a combination of waxy coating and microscopic bumps. The moth-eye nanostructures mimic this effect, and a hydrophobic coating is applied in the fabrication process. Self-cleaning is essential to longevity as it prevents debris from filling the holes responsible for anti-reflection. Scalability In parallel, Wu's group developed a simulation of the optical system. “Doing experiments, sometimes we miss the optimal values,” says Wu, so the model offers “very important physical insight.” Wu thinks the solar cell industry, which has also had success using the moth-eye nanostructure, may be able to use the model to optimize the shape and size of their structures for the wavelengths they're trying to capture. For commercial use, Wu and Hart agree that the result could be applied to something like a TV screen, but more work must be done for touch screens. “This was our first result,” says Wu. “It is important to get the right balance between flexibility and hardness. The moth eye is not flexible. It's curved, but not flexible. That's a nice structure. We are inspired by that.” “The challenges are always in the detail,” says Hart.