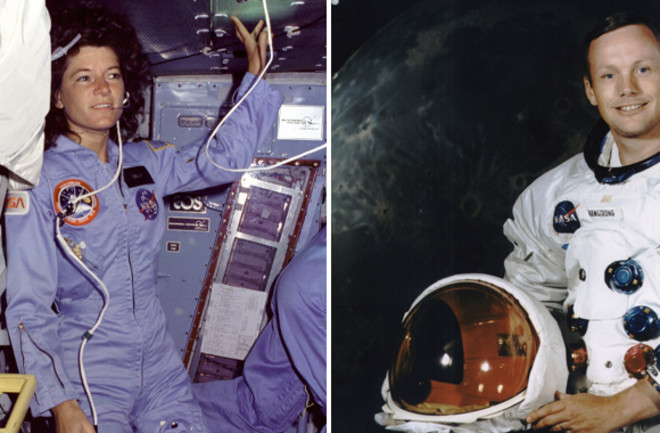 Forty-three years after the first human set foot on the moon and 29 after an American woman first flew in space, Neil Armstrong (born 1930) and Sally Ride (born 1951) resonated in our thoughts again last year. Both will be remembered for milestones that blended scientific and engineering brilliance with powerful, transforming symbolism.

Armstrong’s role on the 1969 Apollo 11 mission to the moon was to serve, alongside crewmates Buzz Aldrin and Michael Collins, as the tip of an immense wedge to penetrate the unknown, backed up by thousands of scientists and engineers and propelled by a brash nation bent on achieving the impossible. Ride will be best remembered not for her role as the first American woman astronaut but rather for her sterling competence, through which she made that groundbreaking accomplishment seem unremarkable and established another truth about the new normal: the inherent neutrality of excellence.

For the majority of the world, born after Apollo, humans have been a spacefaring species for their entire lives, if one tethered to Earth by a short leash. Our dreams forge farther than those lunar footprints. But today the distinction between fact and science fiction is about quantity or magnitude, not quality or language. We have spaceships. We have ventured beyond our home planet. Bigger ships and farther destinations are only a matter of time.

Our first astronauts were like the barnstormers who pushed aeronautical progress at spectacular personal risk, or the trailblazers of steam and sail. But those earlier pioneers seemed more romantic and exciting than the grim monotones and slow-paced action transmitted to our homes during the space race. In his 1970 book Of a Fire on the Moon, Norman Mailer remarked, with some awe, that the techies in Houston, Pasadena, and Florida were accomplishing two bona fide miracles: They were going to the moon—and making it boring.

Exploration had changed. Spaceships are so expensive, and the missions so public, that NASA avoided flamboyant hero types who might put projects at risk. Although he was handsomely square of jaw, Neil Armstrong was the archetypal nerd-astronaut. He saved a Gemini mission from tumbling out of control by combining geeky analysis and athletic reflexes. Training for Apollo, he evaded death in a faulty test apparatus while snatching the real prize: data that would improve a program whose breakneck pace could afford few big errors. This penchant for punctilious, even occasionally preposterous, perfectionism led to an astronaut corps filled with compulsive checklist-checkers.

Ride performed her duty as role model with the same detailed attention she gave to being a shuttle mission specialist. Her outreach program, Sally Ride Science, drew thousands of girls toward careers in technical fields. But again, the mythology was quirkily nerdy. Ride spent 343 hours in space as part of working crews, building a record of step-by-step skill that won respect for female astronauts. I knew her when we overlapped at the California Space Institute and she oversaw Earth-sensing programs, crucial to early discoveries about climate change. I found her professionalism matched only by a fervent interest in the near and looming future of our own planet.

All of us understand instinctively what a hero is. Achilles, Odysseus, Robin Hood, Crazy Horse, and MacArthur... Han Solo and Indiana Jones. Perhaps once we are established in space, the barnstormers and commerce barons will reemerge, getting rich off asteroid mining and amazing billions of Earthlings with new daredevil risks. If so, what will the early decades of human spaceflight—represented by Armstrong and Ride—be called? I think I know: the Era of Grown-ups.