It is a question of mundane simplicity but one that has stumped history’s greatest geniuses: How big is the universe? This year a group of astrophysicists has deduced an answer: The visible universe stretches at least 24 gigaparsecs in all directions. That’s a radius of 78 billion light-years to the less versed.

Neil Cornish, an astrophysicist at Montana State University, and his colleagues got their result by mining data from the cosmic microwave background, ubiquitous radiation left over from the Big Bang. Using the Wilkinson Microwave Anisotropy Probe, Cornish earlier helped determine that the universe is 13.7 billion years old. That age tells how long light from the Big Bang has been traveling and so provides a clue to the size of the universe—but it’s not the whole story.

In some exotic theories, the universe could be smaller than it appears because space curves in on itself. As a result, light would have kept looping around during those 13.7 billion years, creating a hall-of-mirrors effect in which the same bits of universe appear repeatedly in the sky. Cornish and company looked for such repetitions etched into the microwave background and found nothing. What you see is what you get, apparently.

The radius of the universe is not simply 13.7 billion light-years, however, because space has been expanding since the Big Bang. The most rapid expansion happened early on. A distance of one light-year at the time of the universe’s one millionth birthday is now equal to 1,000 light-years. “It’s like compound interest,” Cornish says. “The deposits made early in the travel budget have paid off big time.” 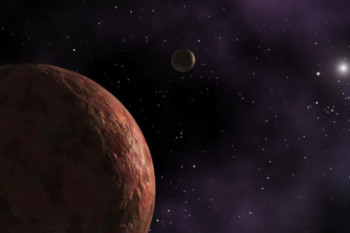 The Sciences139 Minor Planets Found in our Solar System