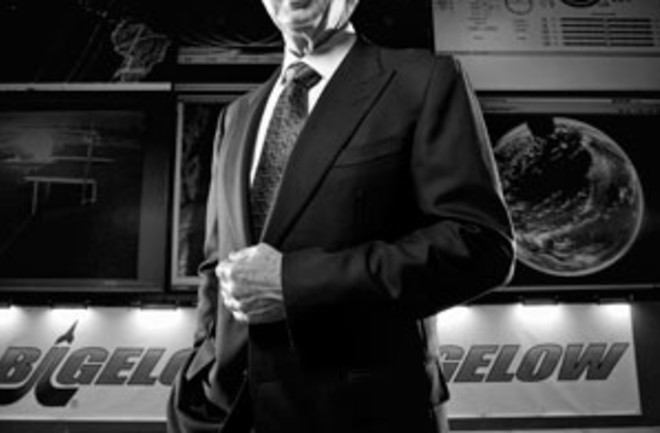 In the brave new world of private spaceflight, Robert Bigelow may be the brashest player of all. Having built his fortune on the Budget Suites of America hotel chain, the Las Vegas entrepreneur is shooting for the stars, betting an estimated $500 million on his company, Bigelow Aerospace. He launched the Genesis space modules in 2006 and 2007 and now plans a fleet of space taxis, space hotels—even a private moon base. In July he and executives from Boeing’s Space Exploration division announced plans for a low-cost manned spacecraft called

, capable of carrying cargo and up to seven passengers into orbit by 2015. As NASA winds down its space shuttle program, the outspoken space cowboy has a lot to say about our missions of the future—and the past.

How does someone go from hotel magnate to space entrepreneur? I decided when I was very young that I wanted to do something exciting and meaningful in the space arena and I had no idea what that was going to be, but I assumed it was going to take a lot of money so I spent a lifetime as a developer, a builder, and an owner of banks to understand the business community and acquire the money to follow my dream. I finally decided to do that about 13 years ago, and in 1999 I formed our company, building on a type of NASA technology for which Congress had cut money—soft structures that expand to full size in space. Oh, my gosh, I can’t believe Congress did this because that type of technology was obviously so superior to the aluminum can technology.

NASA has canceled its human spaceflight program, Constellation, which was supposed to take us back to the moon. Was that a good idea?

Oh, absolutely. It was a dead-man-walking program, and it wasn’t just that there wasn’t enough money. The Americans already have $100 billion sunk into the International Space Station [ISS] and have no way to get there. Then along comes Bush Jr.’s fantasy of going back unnecessarily to the moon, created by NASA and other folks as a consolation for the Columbia disaster. It was a terribly expensive program and had technological and physical difficulties of execution. Ten billion dollars have already been blown on that, and Americans have nothing to show for it.

NASA administrator Charles Bolden has said that private spacecraft developers are the faces of the new frontier. Is that how you see it? Why should the private sector get involved in spaceflight? Who was it that was very involved in getting us to the moon? Who was it that was very involved in building the structures for the ISS? It wasn’t NASA, because NASA is a general contractor. It subcontracts practically everything out, so whom does it subcontract to? It subcontracts to all the normal cast of characters, in the United States primarily. There are some foreign suppliers, but they’re in the minority compared with the amount of work and contracts that are awarded domestically. And we should help feed our own. NASA is on its knees. It has had a terrible record over the past 30 years, and you say, well, why should the private sector get involved? The answer really is, why not? Because the private sector hasn’t had a chance all this time over all these decades, and what do we have to show for it? NASA has not completed a human transportation system since the shuttle first started to fly in 1981.

So where should the government be directing its spending? If you were an investor and you were an American taxpayer, would you want to shove these billions of dollars back into NASA’s hands and say, “ok, do it to us again”? Wouldn’t you want to say, “Boeing, we have some belief in you. Here, for a change, let’s do something unique and different.” Let’s take the most class-A aerospace company we have and say to them, “Here—here’s money. Please go out and execute a good, safe, reliable, affordable capsule that can be put on the best rocket that Americans have with the best pedigree and experience that Americans have.” And that’s the Atlas 5 [operated by a joint venture between Boeing and Lockheed Martin].

How can private industry overcome safety concerns? The lion’s share of money needs to be awarded to Boeing so we’re sure we have our bases covered with a world-class company that can get it done and make it happen. We also need to have another company as a backup. The second-best company is probably SpaceX [run by PayPal cofounder Elon Musk] because it has already demonstrated successes. Are these flights sufficient to give us the kind of comfort that is necessary to entrust human lives? Not by a long shot. However, every flight made by the Falcon 9 [a SpaceX launch vehicle that achieved orbit in June] puts experience on nine motors. When you multiply that out and you do a lot of those flights, your motors can start to have a lot of seconds of experience.

Should the Federal Aviation Administration oversee private spaceflight? We hope the FAA Acquisition System Toolset [FAST] rather than NASA takes jurisdiction over the execution of spaceflights for the private sector. NASA is not capable of administering a lot of flights and overseeing them efficiently. NASA wouldn’t be on its knees today if it were good at executing programs. We want to give that job to the FAA, which already administers tens of thousands of air flights per day in this country and has the expertise to be agile in making these decisions. It will be the death knell if it doesn’t happen.

Where do you see human space exploration going over the next decade? The United States appears to be declining in its ability to command space. Other countries are ascending. If we project that out for another 12 or 15 years, it’s a very uncomfortable picture. It means that not only is the United States not in control, but the United States doesn’t have the ability to execute by itself—without cobbling together a whole bunch of partners—a meaningful expedition. Exploiting the moon, sooner or later, is going to happen: It is the perfect platform from which to jump to the rest of the solar system. It is the perfect platform to gain experience from, and it is self-endowed with frozen water, which is terribly valuable from a rocket fuel standpoint, from a consumption standpoint. The moon has a noncontaminating fuel, 20 million metric tons of helium-3, and the Earth has almost none. Exploiting Mars, sooner or later, is going to happen. These are gigantic opportunities for the human race.