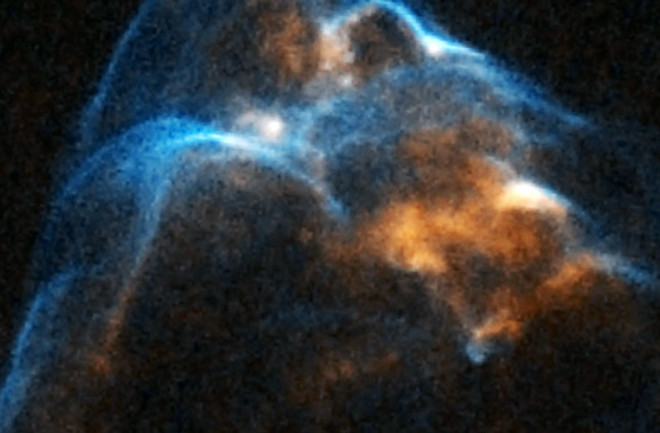 Jets of gas ejected by a newborn star, racing at more than 400.000 miles per hour, stir up an interstellar shock wave. | NASA/ESA/P. Hartigan/Rice University

As a star forms, it attracts a swirling disk of gas and dust. Most of that material collapses into the star. Some remains in orbit, where it clumps to form planets. And some shoots like a jet from the disk’s center at velocities up to 30 times the speed of sound, triggering supersonic shock waves. Last year, Patrick Hartigan of Rice University selected images from 14 years of Hubble Space Telescope observations to produce a flip-book animation of the rippling wakes and collisions in those shock waves. By visualizing star birth in a way that was never before possible, Hartigan’s Hubble “movies” suggest that scientists have much to learn about the jet process. “It’s a universal phenomenon, but we’re not sure we really understand it,” Hartigan says. His team is now using laser bursts to try to mimic the phenomenon in the lab.