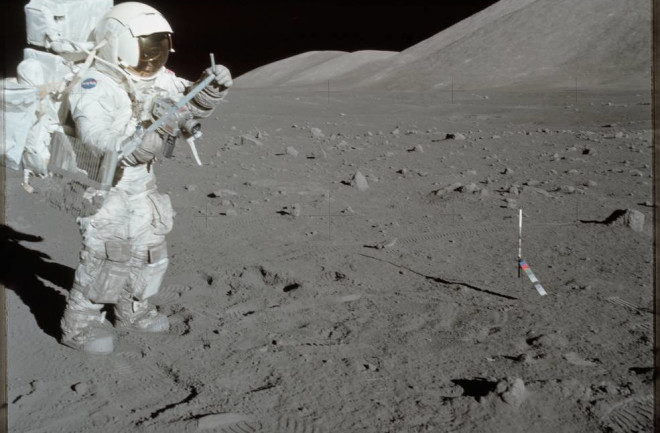 The most recent Moon samples collected came from Apollo 17 in 1972. (Credits: NASA/Eugene A. Cernan)

For nearly half a century, three small rocks have sat quietly, waiting for a world that could appreciate them. The astronauts who picked up these rocks on the moon’s surface didn’t know them to be any more special than the hundreds of pounds of other rocks they collected. But NASA, confident that science would advance, preserved them in their pristine state, hoping to discover new things not available with 1970s technology.

And now, the future has arrived. NASA has selected nine teams from seven research institutions to study the samples. The rocks in question came from the Apollo 15, 16 and 17 missions, and have never been exposed to the atmosphere on Earth. They’ve been stored in special chambers, frozen or kept in helium to best preserve them until researchers were ready to study the samples.

The nine teams will explore different questions about the Apollo rocks. Darby Dyar’s group from Mount Holyoke College will look for tiny glass beads in the samples that would have formed during volcanic eruptions. At NASA’s Goddard Space Flight Center, Barbara Cohen and Natalie Curran will look for noble gases in the samples, which can help them date the rocks.

The Apollo 17 rocks they will study come from a coring sample, meaning multiple layers of rocks have been preserved in the order they were laid down on the Moon. A separate study led by Jamie Elsila Cook, also at NASA Goddard, will look for organic molecules, life’s building blocks, in the lunar samples. Other institutions to win research grants include NASA Ames, the Universities of Arizona, New Mexico, and California Berkeley, and the Naval Research Laboratory.

Scientists are routinely discovering new facts about the lunar rocks they’ve had access to for the past 50 years, as laboratory instruments and techniques improve, and as new lunar missions point researchers toward fresh questions. Technology can now more accurately identify small amounts of various elements or compounds within these rocks, or scan rocks to assess their structure in detail. Such new insights could help researchers understand, for instance, the role that water plays on the moon, now and in the past, as well as what materials might be present on the moon’s surface for manufacturing in the future.

NASA is in the throes of preparations for a return to the Moon, with robotic probes possibly touching down as soon as this year. So it’s suddenly more vital than ever to understand our oldest satellite before returning to it on a permanent basis, as NASA intends. Throughout the Apollo era, astronauts only landed and explored the Moon’s near side, near the equatorial region. NASA hopes to vastly expand that area in the upcoming years, especially through private companies that might carry experiments to the lunar surface or return Moon samples to Earth.

So while these are the last fresh lunar samples for now, there should be plenty more to study in the next decade.