#5 on the top 100 stories of 2013: Scientists Make Progress in Growing Organs From Stem Cells 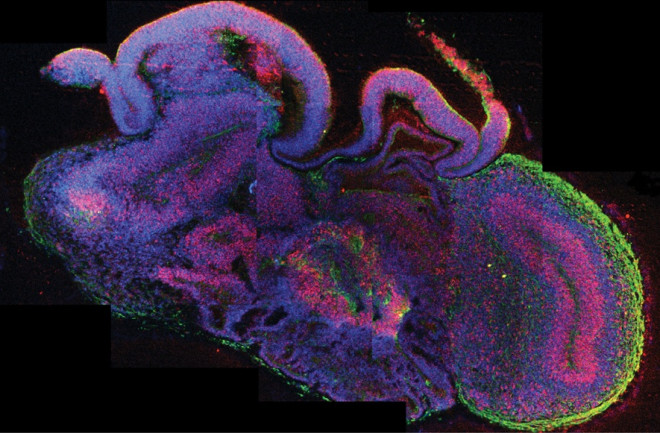 In this cross-section of a brain organoid, neural stem cells are shown in red, neurons in green. IMBA/Madeline A. Lancaster

Liver Buds to the Rescue

Some 16,000 ailing Americans are waiting to receive a liver transplant. But due to a shortage of viable livers, it’s likely that fewer than 7,000 transplants will be performed in 2013. In Japan, where the shortage is worse, the number of people in need of new livers is 10 times as great as the number of deceased donors who could provide one.

That gap motivated stem cell biologist Takanori Takebe and his colleagues at the Department of Regenerative Medicine at Yokohama City University in Japan to find an alternate solution. This year they succeeded in generating mini-livers, or liver buds, from stem cells that were taken from human skin and reprogrammed to an embryonic state. (Embryonic stem cells are notable because they can morph into virtually any cell type in the body.)

When mixed with two other types of cells, the fabricated primitive liver cells organized themselves into three-dimensional structures, complete with blood vessels. In effect, Takebe’s team re-created the process by which a human embryo begins to form a functioning liver.

Transplanted into a mouse, the human liver buds, about 5 millimeters long, exhibited many functions of the mature organ, such as metabolizing sugars and drugs. When the scientists disabled the mouse’s own liver, the human buds kept the animal alive for two months. A person with liver failure would require an infusion of “tens of thousands” of liver buds, Takebe says.

Until the buds can be generated from the skin of each individual patient, recipients will have to rely on immune-suppressing drugs to avoid rejection, just as they would with the transplant of an entire organ. Replacement liver buds might be available to human patients in a decade or less. — Jeff Wheelwright

Scientists can’t yet grow spare parts of the human brain to fix neurological injuries or defects, but they have recently used stem cells to create brain organoids, formations of cells that mimic some of the brain’s regions. A team led by neuroscientist Jürgen Knoblich of Austria’s Institute of Molecular Biotechnology developed the organoids to help them simulate disease.

Two types of stem cells were used to produce the mini-brains: embryonic cells and adult cells that had been reprogrammed to a starter state. The cells were put into a special culture and then suspended in a gel and stimulated by nutrients, all geared to turn them into neurons like those found in the cortex.

The neurons literally “self-organized,” according to Knoblich, and after several weeks formed three-dimensional structures about one-tenth of an inch in diameter.

“If you zoom out and look at the whole, it’s not a brain,” Knoblich says. “But our cultures contain individual brain regions that have a functional relationship with one another.” Besides the dorsal cortex, researchers were able to grow, among other regions, parts of the ventral forebrain, which makes neurons that connect to the cortex, and the choroid plexus, which generates spinal fluid.

In their most impressive experiment, the scientists derived organoids from the skin cells of a person affected by microcephaly. This genetic disorder causes a drastic reduction in brain size and stature. The microcephalic organoids were smaller than the organoids grown from healthy people, apparently because the patient’s stem cells had divided too early and became depleted.

“What our organoids are good for is to model the development of the brain and to study anything that causes a defect in development,” Knoblich says. For example, by taking neural stem cells from a patient with schizophrenia, researchers might turn back the clock and track the onset of the condition in an organoid. Knowing how schizophrenia starts might help prevent it. — Jeff Wheelwright

Human Stem Cells Made From Eggs

It was 1996 when biologists first fused a mammalian skin cell with an egg cell, cloning Dolly the sheep. That was the start of the race to make a human embryo the same way. The method, called somatic cell nuclear transfer (SCNT), replaces the DNA in an egg cell’s nucleus with the genetic material from the nucleus of a skin cell, then tricks the egg cell to start dividing as if it had been fertilized with sperm.

The result: an embryo that is an almost perfect genetic copy of the skin cell donor. In humans, the goal of SCNT is “nonreproductive cloning” — making embryos, then removing stem cells from the embryo and cultivating them to grow into tissues that could cure diseases, replace organs and heal injuries.

But getting eggs to act like embryos turned out to be far more difficult in humans than in sheep. It wasn’t until 2013 that Shoukhrat Mitalipov of the Oregon Health and Science University finally made SCNT work in humans, through careful tweaking and fine-tuning based on experiments with more than 1,000 rhesus monkey eggs. His final protocol requires a few dozen steps.

“It’s a very complex procedure,” he says. Among Mitalipov’s secrets: stimulating reprogramming activity by priming the eggs with caffeine and by precisely dosing them with chemicals that coil and uncoil DNA’s twisted strands, and applying a gentle electric jolt to get the egg to begin dividing. (An embryo created this way will not develop into a fetus.)

There are now other methods to make stem cells, but those made via SCNT have unique value because they are genetic copies of the living person who donated the skin cells (other methods either use foreign cells or involve genetic reprogramming). Thus, replacement tissues made from them shouldn’t trigger the immune system rejection that dooms many transplants.

Making purpose-built tissues may be far in the future, because figuring out the exact recipes to turn cells into functioning bone, heart or spinal cord will take time. But Mitalipov’s triumph has big near-term benefits in giving researchers a new tool to understand all the details of how stem cells grow, divide and differentiate, says Larry Goldstein, director of the University of California San Diego Stem Cell Program: “It’s great science.” — Kat McGowan

[This article originally appeared in print as "Stem Cell Future."]