5 Facts You May Not Know About the First Olympics

When the ancient Greek games began in 776 B.C., they looked a bit different from today’s spectacle. 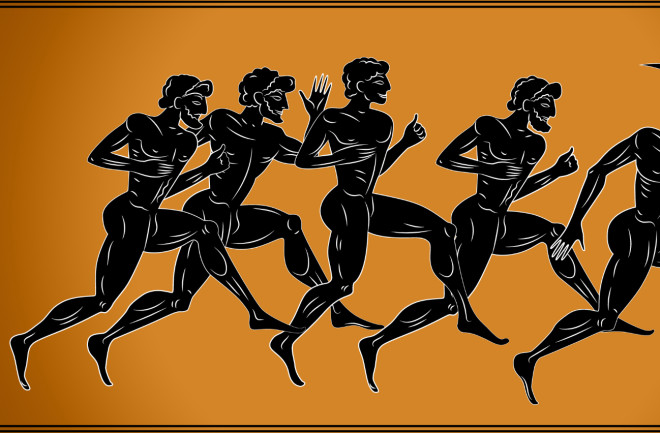 The 2020 Olympic Games, which began last month in Tokyo, are the first to be postponed due to a pandemic and the first to go without in-person spectators. But look back to their humble origins at Olympia, a valley in the northwestern corner of the Peloponnese region of Greece, and it's clear there have been an enormous number of Olympic firsts in the past 3,000 or so years. Don't expect to see the iconic torch and podium, or even women, at these games. Here's what you might have seen instead.

1. The first dozen ancient Olympics had just one event.

Although this year’s summer Olympics include 33 sports, in the beginning there was only one: a 192-meter sprint called the stadion, or stade. Legend has it that organizers chose this distance because it was how far the mythical hero Heracles (Hercules) could run on a single breath. The track ran the length of the stadium, with the start and finish marked only by dirt lines.

Stephen G. Miller, a retired professor of classical archaeology at the University of California, Berkeley, says the event likely drew only a few dozen local competitors and spectators at its origin — far from the tens of thousands that attended in later centuries, and further still from the hundreds of thousands today. “The first two winners in the list were both locals from Elis, the second two were from nearby Messene, and then again a winner from Elis,” Miller says. “Indeed, the winners for the first forty years were all from the neighborhood.”

A cook named Koroibos won the first stadion, but many of the athletes at the time were shepherds and farmhands. Anyone who was male, Greek and free could participate; women, slaves and foreigners could not.

2. An ancient Greek dating system revolved around the Olympics…

Just as today, the Olympics were held every four years. The ancient Greeks referred to the period between two Olympics as an “Olympiad,” and it eventually became the basis of a national dating system. Each Olympiad was named after the athlete who won the previous stadion and ancient historians used the system mainly to reconcile historical events.

For example, Dionysius of Halicarnassus dated the foundation of Rome to the first year of the seventh Olympiad, corresponding to about 751 B.C., and Diodorus Siculus dated the Persian invasion of Greece in 492 B.C. to “the seventy-fifth Olympiad, that in which Astylus of Syracuse won the stadion.”

“[The system] was based on a list of the winners of the stadion footrace every four years,” Miller says. “But that list was only compiled around 400 B.C. and its accuracy has been debated.”

3. …but even they didn’t know when the games began.

“The Greeks themselves didn’t really know when the games started,” says Paul Christesen, a classics professor at Dartmouth College. “They didn’t keep records about that sort of thing. It’s only about 400 years later that someone who lived near Olympia decided it would be interesting to try to write a book about the history of the Olympics.”

That person, Hippias of Elis, was the first to compile a list of Olympic victors. Born some 300 years after Koroibos won the first ever stadion, he supposedly counted the number of names on the list and then multiplied that number by four (because the games were held every four years) to determine the year that the Olympics began — 776 B.C. The math is simple enough, but archaeologists have debated Hippias’ work for over a century.

For one, Hippias didn’t have access to any written records; how could he compile his list of victors? It was known at the time that a man named Lycurgus, guardian to the Spartan King Charilaos, helped found the games. Christesen believes that Hippias actually used a list of Spartan kings (each assigned an average number of years on the throne) to figure out how long ago Charilaos reigned. Then, to cover his tracks, Hippias likely fudged the list of Olympic victors with the names of ancestors from powerful Spartan families.

“We see it as a big problem to invent that kind of information, but the Greeks just didn’t,” Christesen says.

4. It was largely a religious event.

The ancient Greeks put Olympia on the map around 1100 B.C. when they began using it as a religious sanctuary, says Christesen. They believed that Zeus, king of the gods, took up residence there when the Eleans conquered the surrounding area — and that he hurled a lightning bolt into the olive grove there to prove it.

Archaeologists deduce from the religious offerings and dedications left in the area that visitors began coming from a much wider geographic area around 700 B.C. Around this time, says Christesen, the sanctuary was expanded to accommodate more people (mainly in the form of additional water wells). The first stadium, built on a floodplain between two rivers, was a simple one: the Greeks merely leveled its rolling hills to create a flat and dry space and the only event, the stadion, finished at the altar of Zeus. During years not marked by an Olympics, the empty land was planted with wheat.

Over the course of centuries, the site grew to include a bordered sacred area, which contained temples, altars and treasuries, and a secular area that contained training and competition sites. At the height of the games’ popularity in the second century, it is estimated that at least 40,000 people attended — including not just competitors and spectators, but also artists and artisans who hoped to put their talents on display.

Despite this growth, the ancient Olympics always retained its religious roots. “The third day... was always timed to coincide with the full moon, and that whole day they did nothing but sacrifices to Zeus,” Christesen says. “They sacrificed 100 bulls, just an enormous amount of meat, and then they did a lot of barbecuing and a lot of drinking. It was some sort of pre-game, parking lot sort of deal.”

5. There were no gold (or silver or bronze) medals.

While gold, silver and bronze medals are a familiar sight at the modern Olympic games, prizes for ancient athletes were a little more rustic. Many archaeologists believe first-place winners received a victory wreath, snipped directly from Olympia’s olive trees. “It seems likely to me that the crown of victory was always from Zeus’s sacred olive tree,” Miller says.

For the ancient Greeks, wreaths were the highest possible reward and represented the esteemed honor of its holder. Additionally, winners may have received a woolen ribbon, called a taenia, to wrap around their heads and a palm frond to brandish.

After the games, the victorious became important figures in their respective hometowns — often taking on political roles and receiving assorted benefits for life. Each had the opportunity to commission a statue of himself in the sanctuary at Olympia (although only the affluent could afford to do so), ask a poet to write about his gods-granted feat or even have coins made in his likeness.

In a way, those traditions continue today; Olympic winners hailing from Great Britain can receive stamps featuring their image and the postbox of their hometown in gold. When weightlifter Hidilyn Diaz won the first gold medal for the Philippines this summer, the country’s government and businesses banded together to award her a house, condo and a chunk of change equivalent to about $660,000 U.S. dollars. And a German sponsor once offered free beer for life to whoever brought home the gold. Sadly, for today's Olympians, the offer is no longer valid.