One of the most massive things in the universe turns out to have a little buddy. 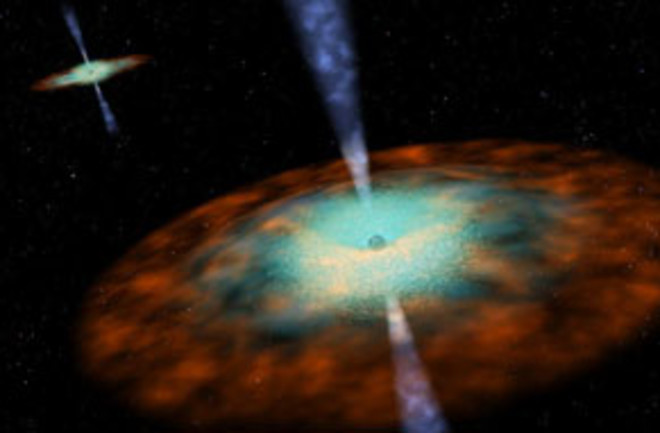 In January an international team of astronomers confirmed that one of the largest black holes in the universe is paired with a much smaller partner nearby—the first definitive observation of black holes in a close binary system [subscription required]. The clues coming from the supermassive quasar OJ287 were periodic flashes of light, which were occurring less than two years apart every 12 years or so. Team leader Mauri Valtonen of the University of Turku in Finland used equations derived from Einstein’s theory of general relativity to show that the pulses could be caused by a small, orbiting black hole plunging into the debris disk around the larger one, situated at one end of the orbital ellipse.

At a meeting of the American Astronomical Society in Austin, Texas, Valtonen described how this model predicted the timing of the most recent flare-up, in September 2007. “This latest observation leaves little choice but to accept this as a binary system,” Valtonen says. “If we had been wrong by more than three days, we would have had to abandon our theory.” Instead, the pulse occurred within hours of his team’s prediction.

Given that most galaxies have a black hole at their center and that galaxies tend to merge, it’s likely that many binary black hole systems exist, Valtonen says. But only the biggest black holes can produce optical flare-ups from their companions. Valtonen’s calculations suggest that OJ287 is 18 billion times the mass of the sun.