37. Saturn's Moon Has a Hidden Ocean 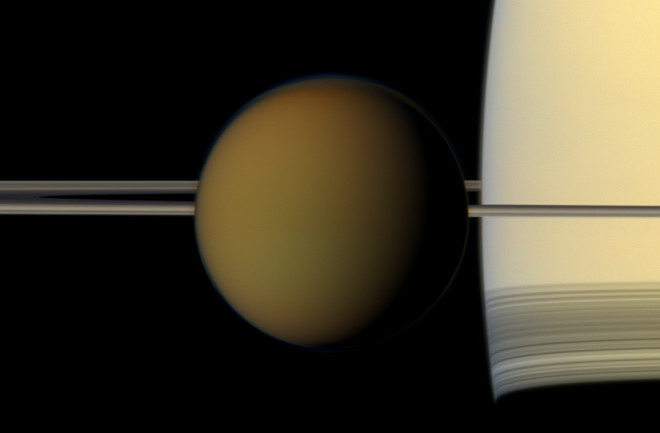 Titan, the largest of Saturn's moons, is a remarkable place. Bigger than the planet Mercury, it has a thick, opaque atmosphere; complex weather; and lakes of liquid natural gas. Last June astronomers added another wild detail to the profile: a global ocean buried beneath the icy surface.

The discovery came from six flybys of Titan that NASA's Cassini spacecraft, orbiting Saturn since 2004, made between 2006 and 2011. During those passes, astronomers measured how the intense pull of Saturn’s gravity deforms Titan during its 16-day revolution around the ringed planet. If Titan were a solid body, it would barely be affected, bulging only about 3 feet during its closest approach to Saturn. Cassini's measurements revealed that Titan actually bulges a substantial 30 feet, indicating that the moon's surface rides on top of a sloshing layer of water of unknown depth. Scientists suspect that Jupiter's moons Europa and Ganymede also have hidden oceans. But Titan is particularly intriguing because it has abundant organic molecules on its surface. Organics and liquid water are crucial ingredients for life.

So far, Cassini's observations hint at a disappointingly cold and inhospitable ocean floor. A dedicated Titan probe could give a real answer. In an era of diminished budgets, though, that may not happen for many years.