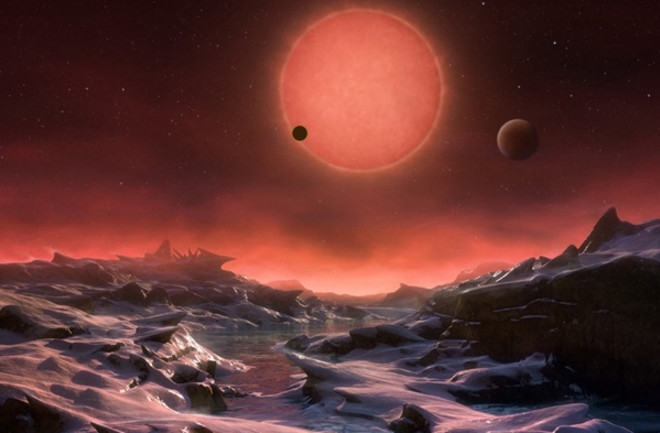 GJ 1061 is a cool red dwarf similar to the star TRAPPIST-1. This artist’s concept imagines a view from the surface of one of TRAPPIST-1’s multiple exoplanets. (Credit: M. Kornmesser/ESO)

There is a triplet of Earth-sized planet candidates orbiting a star just 12 light-years away, a new study has found. And one appears to be in the habitable zone.

All three candidates are thought to be at least 1.4 to 1.8 times the mass of Earth, and orbit the star every three to 13 days, which would put the entire system well within Mercury’s 88 day orbit of the Sun. The planet orbiting the star every 13 days, dubbed planet d, is most interesting to scientists — it falls within the star’s habitable zone where liquid water could exist on the surface.

“We are now one step closer [to] getting a census of rocky planets in the solar neighborhood,” said Ignasi Ribas, co-author on the new paper and researcher at the Institute of Space Sciences in Barcelona, Spain.

The planets’ host is GJ 1061, a type of low-mass star called an M dwarf that is the 20th nearest star to the Sun. The star is similar to Proxima Centauri, the star closest to Earth, which was discovered to host a planet in 2016. GJ 1061, however, shows less violent stellar activity, suggesting that it might currently provide a safer environment for life than Proxima Centauri.

But to assess habitability, a star’s whole history needs to be accounted for and M dwarf stars could have had stronger activity levels in the past and also have much longer lifetimes than Sun-like stars. This means that a close-orbit planet, like planet d, may have spent many millions of years being blasted by intense radiation from its star, so it may not retain a life-sustaining atmosphere.

The La Silla Observatory in Chile, where at least three new exoplanets have been discovered. (Credit: Iztok Boncina/ESO)

The new planets were discovered with the radial velocity method — a technique that uses tiny wobbles in a star’s orbit to revel the gravitational presence of exoplanets. This technique typically reveals giant exoplanets close to their host star, but increasingly, this method is being used in long-term campaigns to reveal smaller exoplanets.

Using the HARPS instrument on the 3.6-meter telescope at the European Southern Observatory in La Silla, Chile, astronomers observed the star over 54 nights from July to September in 2018. The star was one target of a larger campaign called the Red Dot project, which since 2017 has surveyed small nearby stars to look for terrestrial planets like Earth.

The data showed the signatures of three, and possibly four, candidate planets. The scientists suspect the fourth signal is just stellar activity — not a real planet. But after calculating the remaining three planets’ orbits, the scientists could not rule out an additional, unseen fourth planet. This undiscovered planet would have a much longer orbit, so further observations would be need to determine if there really is a fourth planet farther out.

“It’s a great discovery of course, but it doesn’t surprise me,” said Michael Endl, astronomer at the University of Texas at Austin, who was not involved with the new research. “Since NASA’s Kepler mission we basically know that small planets are abundant around those very cool and small stars.”

The results have been published on the preprint site arXiv and submitted to the journal Monthly Notices of the Royal Astronomical Society.