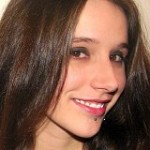 on the reader survey. I think the goal of an N of 500 is totally viable. In the past I've actually pushed it well north of 600 by leaving the survey open for a while. I know there are some people who drop in once a week or so, or don't have time or inclination to participate initially. If you want to participate:

It will take ~10 minutes, and no answer is mandatory. There are already a few robust findings though. GNXP readers are well educated and smart. About 60-70 percent aver that they are irreligious, and 85 percent reject the existence of the supernatural. Over half have backgrounds in the natural sciences. None of this is too surprising. I've been taking surveys of the readership since 2004, and the main change has been in politics. Whereas in the mid-2000s libertarians were the largest contingent, now Left-liberals are, though there remains a sizable libertarian minority. One of the most consistent findings on this weblog has been the sex ratio: the proportion of female core readership is on the order of ~15%. Since moving to Discover it looks like that ~20% is the new set point. This shouldn't be too surprising...there are very few explicitly female handles in the comments. Though because of the male bias in the readership there's obviously going to be a natural tendency toward assigning implicit male identity to anonymous or gender ambiguous commenters when a substantial number will be female. Currently the most prominent female in the comments is Michelle

in her own right (pictured above). The very fact that I could type the previous sentence is a commentary on the sex ratio imbalance! A major reason I want to go north of 500 responses is that I can compare across two classes more easily. The smaller a sample size the greater the error. I'd be a lot more confident comparing those who believe in God vs. those who don't if I had more respondents who actually believed. But now that I'm at nearly 100 female respondents I thought it would be interesting to compare across the two sexes in terms of similarities and differences. First, let's compare the cross-tabs of sex by other variables in a table. You see below the percentage of males and females who fall into a particular class. So below you can see that 73 percent of males support abortion on demand vs. 82 percent of females. While 36 percent of male respondents have made a non-trivial edit to Wikipedia, only 12 percent of female respondents have.

Some university without completion or higher education less than bachelors degree1719

Yes to abortion on demand7382

Accepts the existence of supernatural1319

Knows what narrow-sense heritability is3827

Have to be on guard against genetic determinism67

Genetic determinism is a concern, but often overblown5067

Genetic determinism is not a concern4426

Has made non-trivial edit to Wikipedia3612

Next I looked at the open ended questions. What's the difference in sexual partners? I'm not going to give you a chart here because what you see isn't too unexpected. Most people have less than 20 sexual partners, but a few people claim hundreds and even thousands of partners.

The median and mean are different because the mean is much more sensitive to outliers than the median. You see that there are some really promiscuous males who are driving the average up. So I decided to limit the sample to a more realistic range (for mortals). Interestingly you now see that female readers have somewhat more sexual partners than males! There are some obvious interpretations of what's going on here, but I'll leave it to you guys. Now let's look at the political orientations. Specifically, political liberalism and economic liberalism (Left-liberalism, I confirmed that most readers understood my attempt with cross-tabs on taxes). In the charts below blue = male and red = female.

The differences are small. I'd expected a bigger difference on economic issues, but though males are more conservative, not especially so. I wanted to look at scatter plots, but the problem here is that there are only 10 discrete values on each dimension, so there's going to be a lot of overlap. So below you see plots where positions on the coordinate map are shaded in relation to how many individuals match that social and economic liberalism combination.

Just so you know, some people left their sex undefined, so that's why you see a match at 10 for economic liberalism and 0 for social liberalism on the non-sex differentiated plot, but not on the male and female ones. The readers of this weblog tend toward Left-liberalism, but not overwhelmingly so, with a large libertarian minority, and a non-trivial conservative one. Next let's look at how many years individuals have been reading Gene Expression. Here at the summary statistics:

Males have been reading much longer. I've long noticed greater "churn" among the female readership. The proportion of females is the same, but they tend to always report reading for not as long. This can be explained by women coming and going more often. Here's the density distribution with two curves, one for males and one for females:

Finally, is there a difference in self-reported IQs by sex? Not much: 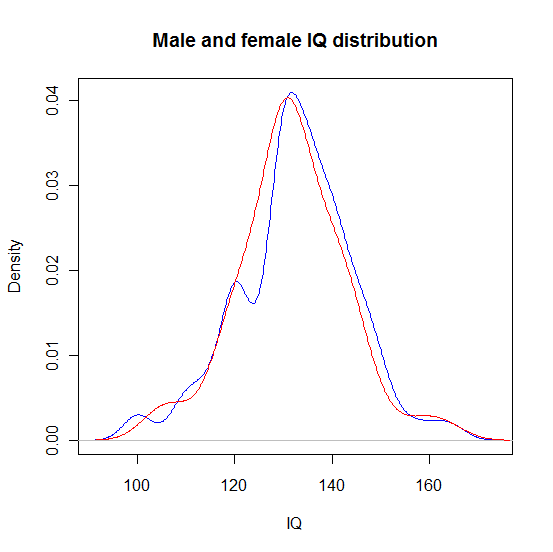