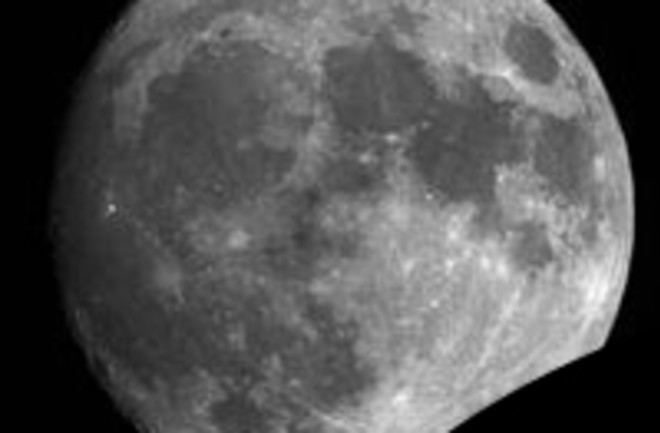 Folks in Europe, Africa, and Asia can say goodbye to 2009 by viewing a very slight lunar eclipse on the last day of the year: Thursday, December 31. The event lasts for about an hour starting at 18:52 UTC, with deepest eclipse, such as it is, at 19:22. Only a small part of the Moon will be in the deepest part of the Earth's shadow, so this is nowhere near a total eclipse, when the Earth fully blocks sunlight from reaching the Moon. However, if you go out and take a look you'll see the full Moon looking distinctly flattened on one side, and perhaps the rest of the Moon's surface will look dusky. I've made a little image here to show you about how much the Moon will be covered, and approximately where. Like I said, only a small part will be darkened.

Not everyone will see this; North and South America are basically shut out of this event since it happens on the other side of the planet and the whole thing's over before the Moon rises. The image of the Earth here shows where the eclipse will be visible: if you can see where you live, then you can see the eclipse. The closer you are to the center of the map, the higher the Moon will be in the sky at midpoint of the eclipse. The next lunar eclipse visible will be in June 2010, but it's partial and will only be visible in Australia. After that, there is a full eclipse in December 2010 which will be seen by North and South America -- though the farther west you are the better as far as decent viewing times go (it'll be around midnight for me in the Mountain time zone). Anyway, if you want to learn about lunar eclipses (like what I mean by partial versus total, and what an umbra and penumbra are) then take a look at the Mr. Eclipse site, which has great info. I'll note that this last eclipse of 2009 is also a so-called Blue Moon: the unofficial term for the second full Moon in a single month. There's no real significance to it -- the Moon ain't blue, folks, despite a bunch of news sites already posting pictures of the Moon Photoshopped to look that color without explanation. But the real thing here is that celestial geometry is putting on a small show for you, and what better way to ring in a new year?

Tip o' the umbra to AstroPixie for reminding me about this!