20 Things You Didn't Know About Magnetism 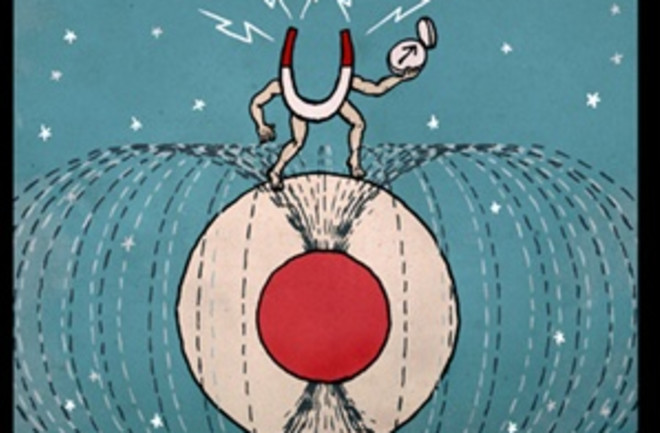 1. Magnetism is familiar to every fifth grader, but describing it can confound even the most brilliant physicist.

2. Take the case of Richard Feynman. When asked to explain magnetism, he urged his BBC interviewer to take it on faith (video). After seven minutes of stonewalling, he finally said, “I really can’t do a good job, any job, of explaining magnetic force in terms of something else that you’re more familiar with because I don’t understand it in terms of anything else that you’re more familiar with.”

3. He did break down and try for a few seconds before abandoning the attempt. Those seconds were packed with oversimplifications: “All the electrons [in a magnet] are spinning in the same direction.”

4. But who better than Feynman would have known that not all electrons spin in the same direction?

5. And they don’t actually spin. “Spin” is just a physicist’s term for the little magnetic north and south poles baked into every electron. The orientation of those poles defines the direction of the electron’s (somewhat imaginary) rotation.

6. Why does every electron have those poles? As soon as someone finds out, we’ll get back to you.

7. Here is what we do know. Within an atom, each electron is usually paired with an opposite- oriented electron so that their magnetic pulls cancel each other out.

8. But if some of the electrons are unpaired, they can be induced to move around so that their poles line up, creating a net magnetic field. The arrangement of the electrons in metals makes them particularly open to magnetic peer pressure.

9. DIY refrigerator magnet: Apply an external magnetic field to some hot metal. Cool it so the aligned electrons get frozen in place. Slap on your local plumber’s business card, and — voilà!

11. You are standing on a magnet right now. The earth’s magnetic field is created by electric currents in an ocean of molten iron at its core. That’s why the north pole of a compass needle points ... er ... why north? Since north poles are attracted to south poles, the “north” arrow on your compass actually points toward the earth’s south magnetic pole, which is the one up north. Got it?

12. And the earth’s magnetic south (aka “north”) pole isn’t even precisely at the geographic north pole. Right now it is in the Arctic Ocean, near northern Canada.

13. Worse still, it is constantly drifting in response to currents in the earth’s core. It is moving toward Siberia at a rate of up to 35 miles per year, according to the U.S. Geological Survey. Hey, shift happens.

15. Where lodestones come from is another mystery of magnetism. Some geologists think they are created when lighting strikes iron-rich rocks.

16. Microbes, birds, and some other animals have magnetic crystals inside their bodies that allow them to orient themselves.

17. That is probably why loggerhead turtles can migrate 8,000 miles in unfamiliar waters while humans can get lost looking for the restroom at Olive Garden.

18. Magnetic Resonance Imaging (MRI) machines generate a field 60,000 times as intense as the earth’s to vibrate the hydrogen atoms in your body; in response, the atoms emit radio waves that are analyzed to produce a map of your insides.

19. Using a sensor the size of a sugar cube, researchers from the National Institute of Standards and Technology can track the magnetic pattern of a human heart.

20. The signal is faint, but the good news is that science has proved attraction is quantifiable. Word up, Hallmark.