It's got solid and liquid parts, it's almost as hot as the sun, and it may be teeming with life. 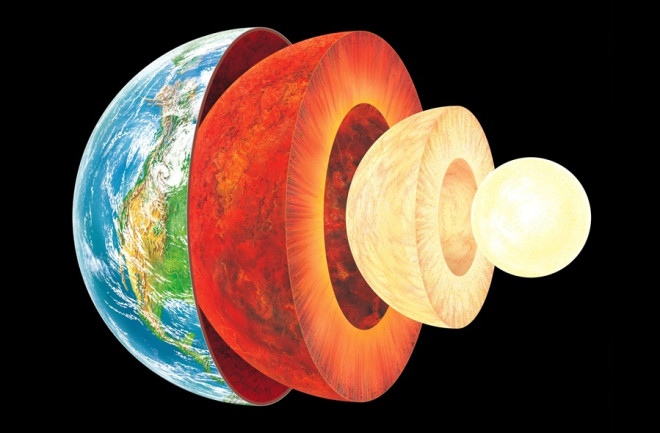 1. In 1692 Edmond Halley (of comet fame) proposed that the Earth is hollow. Below the outer crust where we live, he pictured two concentric shells and a core about the size of Mercury, all floating in a luminous gas.

2. Helloooo down there: Halley even imagined that these shells might be inhabited. Jules Verne riffed on this idea in his classic Journey to the Center of the Earth.

3. Halley was right about the planet-size core, at least. At Earth's center is an iron-rich orb more than 4,000 miles wide — bigger than Mercury, actually — closer to our feet than L.A. is to New York.

4. Its outer part is molten. Its inner part is a solid hunk of metal that spins independently of the rest of the planet.

5. Earthquake waves that pass through the inner core travel faster north-south than they do east-west. One theory: The inner core consists of metallic crystals aligned with Earth’s poles, and the waves move more rapidly when they go with the grain.

6. The inner core is nearly as hot as the surface of the sun, and the pressure down there is 3 million times what it is on the surface.

7. Earth's solid and liquid cores together generate the magnetic field that keeps the solar wind — a nonstop, 250-mile-per-second stream of charged particles emitted by the sun — from stripping away our atmosphere.

8. Earth's mini-me: A group at the University of Wisconsin is attempting to model Earth's field by bottling 500,000-degree plasma in a 10-foot-wide aluminum sphere with really solid walls. The currents inside should mimic flows in the outer core.

9. The deepest place ever reached by human technology is the Kola Superdeep Borehole near Murmansk, Russia, the product of a Cold War inner-space race.

10. Bacteria have been discovered in the cavities and cracks of gold mines 2.4 miles beneath Earth's surface. They live on hydrogen and sulfates, and their primary source of energy is radiation, not the sun. Yum.

11. Microbiologist James Holden of the University of Massa­chusetts at Amherst speculates that our planet's deep biomass could weigh as much as all the things living up here on the surface.

12. According to NASA scientists, life on Mars may be huddling out of sight in a similar deep, hot biosphere.

13. Change is inevitable, even in the core. Examining paleomagnetic data, geoscientists at Johns Hopkins University suggest that the eastern and western halves of Earth’s core take turns growing and melting.

14. That may be why the axis of Earth's magnetic field is cockeyed, leaning these days to the east, while a few geologic eyeblinks ago it tilted to the west.

15. The Johns Hopkins researchers think the axis gets anchored in the growing half. Which could account for our planet’s weird history of magnetic field reversals, with north and south poles swapping places.

16. Such magnetic field quirks might also be explained by pandemonium at the boundary between the molten core and the overlying mantle.

17. Berkeley physicist Richard Muller speculates that oxygen, silicon, and sulfur are being squeezed out of the inner core and floating up to the core-mantle boundary, where they collect into hot, slushy dunes. Every once in a while, one dune may violently tumble into the mantle, revving up convection and disturbing the magnetic field.

18. Reduce, reuse, recycle. The slow churn of plate tectonics pulls crust into the interior, where any plant and animal life in it gets trapped and cooked. Organic material eventually resurfaces in lava and volcanic gases, including atmosphere-warming carbon dioxide.

19. Such cycling, and the protective magnetic field generated by the core, keep our planet at the perfect temperature for life.

20. Look at Venus, with its 900-degree Fahrenheit days and nights. If not for our planet's restless insides, that could be us.