20 Things You Didn't Know About... Galileo 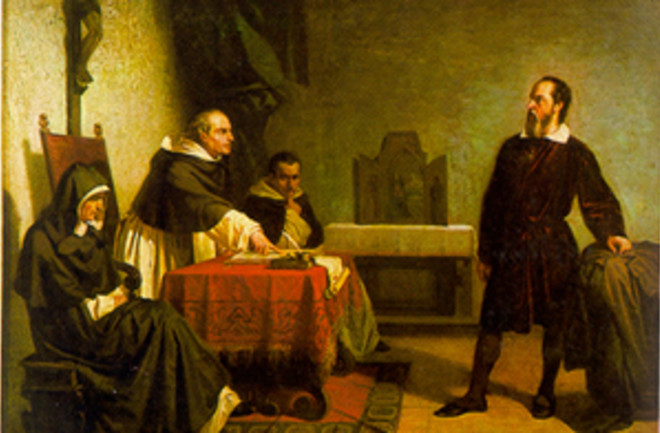 1 Galileo was sent to a Jesuit monastery to study medicine. But after four years he announced he’d found his calling: to be a monk. His father withdrew him—but not before Galileo joined the order, making him a defrocked priest for life.

2  Nicolaus Copernicus never wrote down his theories for fear it would jeopardize his day job working for the Catholic Church. For promoting Copernican theory, Galileo was sentenced to life imprisonment, later reduced to house arrest.

3  A hundred years after he died, when his body was being moved for reburial, a fan snipped off the middle finger of his right hand as a memento. Galileo’s finger is now on display, erect, at the Museum of the History of Science in Florence.

4  The finger points toward Rome.

5  Asked about the Inquisition, he said, “Holy Writ was intended to teach men how to go to Heaven, not how the heavens go.”

6  Galileo remained a devout Catholic until his death, but he never married the mother of his three children.

7  In 1617, Galileo bought a villa west of Florence to be close to his daughters’ convent. Because his daughters’ illegitimacy would warrant a large dowry that he was unwilling to pay, the girls had no choice but to stay at the convent for the rest of their lives.

8  Einstein was Galileo’s biggest fan. “All knowledge of reality starts from experience and ends in it,” wrote Einstein. “Propositions arrived at by purely logical means are completely empty as regards reality. Because Galileo saw this, and particularly because he drummed it into the scientific world, he is the father of modern physics—indeed, of modern science altogether.”

9  According to legend, Galileo began his study of the pendulum while watching a lamp swing back and forth in the cathedral of Pisa. Because Galileo conducted his experiments in the air, he believed (wrongly) that a pendulum’s period is constant.

11  Turned on by math and accepting a challenge to determine the dimensions of Dante’s Inferno, he deduced that Dante’s Lucifer was 2,000 arm-lengths long.

12  The University of Pisa hired Galileo as a professor of mathematics, but because he was difficult to work with and inappropriate with his students, the university chose not to renew his contract.

13  Although he formulated the laws of universal acceleration, there is no evidence he ever dropped balls off the Leaning Tower of Pisa to prove them.

14   He didn’t invent the telescope, either—he got the idea from a Dutch spectacles maker who had invented a spyglass. (He was the first to use a telescope to formally observe the sky, though.)

15  In 1992, three years after Galileo’s namesake spacecraft was launched, the Vatican formally cleared Galileo of any wrongdoing.

16  In 2000, the Galileo probe found evidence of a frozen-over ocean on Europa, one of the four moons of Jupiter that Galileo (the man) discovered. His observations of Jupiter’s moons are what convinced him that we don’t live in an Earth-centered universe.

17  When Galileo thought he’d discovered multiple Saturns, he kept his finding hidden by encoding it in an anagram.

18  He also sketched various inventions, including a candle-and-mirror combination to reflect light through a building, an automatic tomato picker, a pocket comb that doubled as an eating utensil, and a ballpoint pen.

19  After his father died, and in fear of debtor’s prison, Galileo made a living designing a military compass to aim cannon­balls. His earlier invention—the first thermometer to measure temperature variations—was a failure financially.

20  Galileo, buried between Michelangelo and Machiavelli, is said to have had his gravestone inscribed with the words “But the Earth does move.” It’s not true.