20 Things You Didn't Know About Galaxies

The Milky Way rotates at 560,000 miles per hour, and makes a full revolution every 200 million years. Or did you already know that? 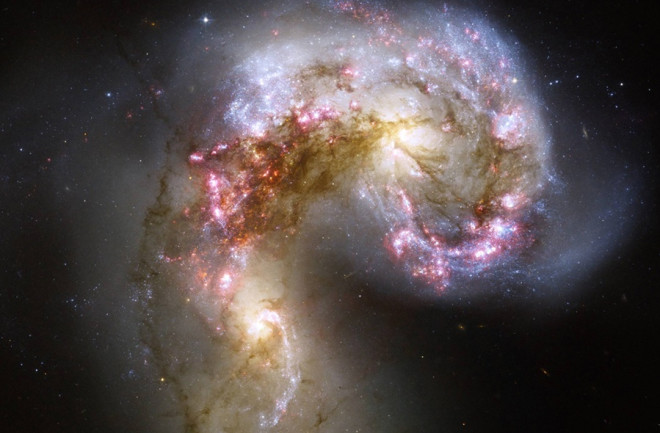 1. Eighteenth-century philosopher Immanuel Kant was one of the first people to theorize that the Milky Way was not the only galaxy in the universe. Kant coined the term island universe to describe a galaxy.

2. Astronomers now estimate that there are 100 billion galaxies in the observable universe.

3. One of the earliest uses of the English term Milky Way was in Geoffrey Chaucer’s 14th-century poem “The House of Fame.” He likened the galaxy to a celestial roadway.

4. While we’re talking road trips: Due to the expansion of the universe, all* most other galaxies are receding from our own. Galaxies farther from the Milky Way are speeding away faster than those nearby.

5. Some of the galaxies receding from the Milky Way are ellipsoidal, like footballs. Galaxies can also be thin and flat with tentacle-like arms — just like the Milky Way.

6. Galaxies come in irregular shapes, too, including many dwarf galaxies. These galaxies, the smallest in the universe, contain only a few hundred or a few thousand stars (compared with 100 billion stars in the Milky Way).

8. Dwarf galaxies frequently lose their stars to their larger neighbors via gravity. The stars stream across the sky as the dwarf galaxies are ripped apart. Alas, you can’t see it with the naked eye.

9. You also can’t see the enormous black hole lurking in the center of the Milky Way, though if you’ve ever looked at the constellation Sagittarius, the archer, you’ve looked in the right direction.

10. Most galaxies have a black hole at the center, and astronomers have found the mass is consistently about 1/1000th the mass of the host galaxy.

12. Every galaxy does have dust, though. Produced by stars, the dust causes light to look redder than it really is when observed visually, which can make it difficult for astronomers studying properties of stars.

13. That dust can really travel, too. Some galaxies drive galactic winds, expelling dust and gas at hundreds of kilometers per second into the intergalactic medium, the space between galaxies.

14. These winds are caused by starlight exerting pressure on the dust and gas; the fastest galactic winds are in distant galaxies that are forming stars more rapidly than the Milky Way.

15. The Milky Way rotates at about 250 kilometers per second (about 560,000 mph) and completes a full revolution about every 200 million years.

16. One galactic revolution ago, dinosaurs ruled the Earth.

17. Galaxies rotate faster than predicted based on the gravity of their stars alone. Astronomers infer that the extra gravitational force is coming from dark matter, which does not emit or reflect light.

18. Dark matter aside, galaxies are mostly empty space. If the stars within galaxies were shrunk to the size of oranges, they would be separated by 4,800 kilometers (3,000 miles).

19. If galaxies were shrunk to the size of apples, neighboring galaxies would only be a few meters apart. The relative proximity of galaxies means that galaxies occasionally merge.

20. In about 4 billion years, the Milky Way will merge with the Andromeda galaxy. The result of the merging process — which will take at least a hundred million years — will be an ellipsoidal galaxy nicknamed “Milkomeda.”

Editor's Note 10/13/14: We mistakenly said all galaxies are receding from ours when in fact only some are. We regret the error.