20 Things You Didn't Know About Fire

Fire makes water. Fire is a tree running in reverse. Fire is not a thing at all. 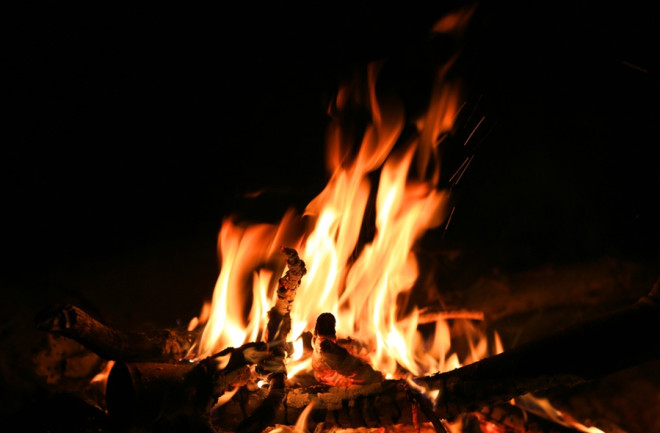 1. Fire is an event, not a thing. Heating wood or other fuel releases volatile vapors that can rapidly combust with oxygen in the air; the resulting incandescent bloom of gas further heats the fuel, releasing more vapors and perpetuating the cycle.

3. So a bonfire is basically a tree running in reverse.

5. Earth is the only known planet where fire can burn. Everywhere else: Not enough oxygen.

6. Conversely, the more oxygen, the hotter the fire. Air is 21 percent oxygen; combine pure oxygen with acetylene, a chemical relative of methane, and you get an oxyacetylene welding torch that burns at over 5,500 degrees Fahrenheit — the hottest fire you are likely to encounter.

7. Oxygen supply influences the color of the flame. A low-oxygen fire contains lots of uncombusted fuel particles and will give off a yellow glow. A high-oxygen fire burns blue.

8. So candle flames are blue at the bottom because that’s where they take up fresh air, and yellow at the top because the rising fumes from below partly suffocate the upper part of the flame.

9. Fire makes water? It’s true. Place a cold spoon over a candle and you will observe the water vapor condense on the metal ...

10. ...because wax — like most organic materials, including wood and gasoline — contains hydrogen, which bonds with oxygen to make H2O when it burns. Water comes out your car’s tailpipe, too.

11. We’ve been at this a long time: Charred bones and wood ash indicate that early hominids were tending the first intentional fires more than 400,000 years ago.

13. The ancient Greeks started fire with concentrated sunlight. A parabolic mirror that focuses solar rays is still used to ignite the Olympic torch.

14. Every 52 years, when their calendar completed a cycle, the Aztecs would extinguish every flame in the empire. The high priest would start a new fire on the ripped-open chest of a sacrificial victim. Fires fed from this flame would be distributed throughout the land.

15. Good burn: The 1666 Great Fire of London destroyed 80 percent of the city but also ended an outbreak of bubonic plague that had killed more than 65,000 people the previous year. The fire fried the rats and fleas that carried Yersinia pestis, the plague-causing bacterium.

16. The Peshtigo Fire in Wisconsin was the second deadliest blaze in United States history, taking 1,200 lives — four times as many as the Great Chicago Fire. Both conflagrations broke out on the same day: October 8, 1871.

17. America’s deadliest fire took place April 27, 1865, aboard the steamship Sultana. Among other passengers were 1,500 recently released Union prisoners traveling home up the Mississippi when the boilers exploded. The ship was six times over capacity, which helps explain the death toll of 1,547.

18. The Black Dragon Fire of 1987, the largest wildfire in modern times, burned some 20 million acres across China and the Soviet Union, an area about the size of South Carolina.

19. Spontaneous combustion is real. Some fuel sources can generate their own heat — by rotting, for instance. Pistachios have so much natural oil and are so prone to heat-generating fat decomposition that the International Maritime Dangerous Goods Code regards them as dangerous.

20. Haystacks, compost heaps, and even piles of old newspapers and magazines can also burst into flame. A good reason to recycle Discover when you are done.