20 Things You Didn't Know About Comets

Kometes is ancient Greek for “a head with long hair.” 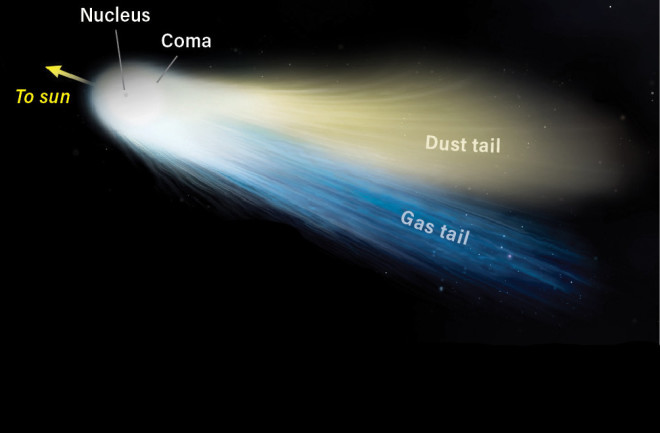 1. Gotta love those long-hairs. We’re talking comets, of course. The word derives from kometes, ancient Greek for “a head with long hair.”

2. While the Greeks began using the term about 2,500 years ago, astronomers in both China and Mesopotamia logged appearances of the long-tailed objects at least 500 years earlier.

3. We don’t know when humans first observed comets, but in 2018, two researchers claimed that some of France’s famous Lascaux cave art — created about 17,000 years ago — depicted cometary activity.

4. It wasn’t until the 17th century that early astronomers determined comets were celestial objects with extremely elongated elliptical orbits around our sun.

5. Building on the “dirty snowball” model developed in the middle of the 20th century, we now know a comet’s nucleus of ice, rock and other components (such as dust and frozen gas), ranges from less than a mile to a few dozen miles in diameter.

6. For most of its cold, lonely journey, a comet is a tail-less, very dark object, coated in a layer of dust and other particles. The grime reduces its albedo, or reflectivity, to the equivalent of charcoal.

7. As a comet nears the sun and heats up, its ice begins to melt and bits of released grime form a coma: a dusty cloud around the nucleus. Solar winds and other emissions create at least two separate tails of dust and gas — the “long hairs” that give comets their name.

8. Astronomers believe all comets originate in one of two icy expanses of debris left over from the formation of our solar system. One of them, the Kuiper Belt, is a doughnut-shaped cloud of these scraps that starts beyond Neptune, about 3 billion miles from the sun.

9. Periodic comets, which have orbits of less than 200 years — such as the famous 1P/Halley — typically come from the Kuiper Belt.

Comets with orbits of more than 200 years hail from the more distant Oort Cloud. Both debris fields are left over from the system’s formation. (Credit: Roen Kelly/Discover)

10. The more distant cometary homeland, the Oort Cloud, is about 18 trillion miles from the sun. Non-periodic comets originate way out there. Those comets, denoted with a C, have orbits lasting 200 years or more — sometimes a lot more.

12. Sometimes comets go missing: They may get bumped out of orbit, crash into another object or simply run out of particles to shed, and ice to boil off, after a last swing around the sun.

14. Then there’s the X factor: Comets for which a reliable orbit has not been calculated get an X prefix. This category consists mostly of historical flybys, likely from the distant Oort Cloud, that have yet to make a return visit.

Comet 67P/Churyumov–Gerasimenko originated in the Kuiper Belt, one of two cometary homelands in our solar system. (Credit: ESA/Rosetta/NavCam)

15. According to NASA, more than 3,500 comets have been identified so far, but that’s small potatoes compared with the billions, possibly trillions that astronomers believe may be out there.

16. While researchers have a solid understanding of what comets are, they can still surprise us. In April, for the first time, astronomers reported in Nature Astronomy that they’d found comet particles embedded in a meteorite found in Antarctica.

17. Our solar system is not alone when it comes to dirty snowballs whizzing around. Astronomers have found several exocomets — the most recent in March — circling Beta Pictoris, a young star that’s 63 light-years from our own.

18. Back on Earth, a technique called the comet assay, created in the 1980s, has been an invaluable tool for analyzing DNA and identifying damaged segments.

19. Formally known as single-cell gel electrophoresis, the comet assay suspends cells in gel and, using an electric field, knocks apart their molecules — kind of like a cue ball hitting racked balls on a pool table.

20. The traveling molecules and other fragments separate by size and charge. Intact DNA tends to stay put, more or less, but the broken bits of damaged double helix travel further through the gel, creating a pattern that resembles the tail of a comet. And that’s no tall tale.