IDing crooks from DNA in their fingerprints, the 8 percent of our genome that came from viruses and the plant that laughs at our genetic endowment 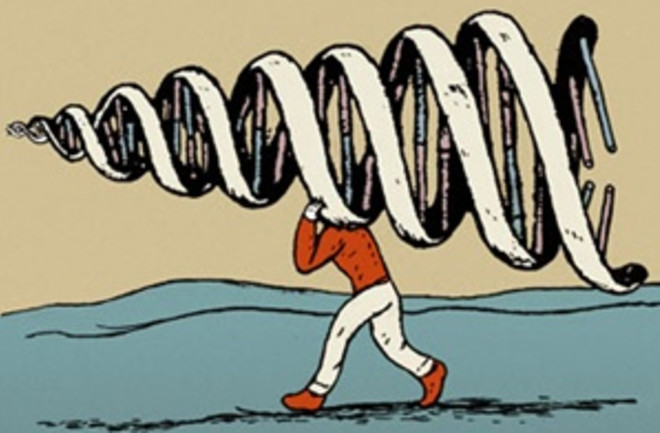 1  Sorry, Jimmy: James Watsonand Francis Crick did not discover DNA. That honor goes to Swiss biochemist Friedrich Miescher, who in 1869 found the molecule in the nuclei of white blood cells and called it nuclein.

2  Nor did they figure out that DNA is our genetic blueprint; bacteriologist Oswald Averyand his colleagues did that in the early 1940s.

3  What Watson and Crick did do, in 1953, was decipher the double-helix structure of DNA. Their discovery ran as a single-page paper in Nature.

4  Phosphorus is a key component of DNA, but late last year a team of NASA scientists published a controversial study reporting that they had found a bacterium that could use arsenic instead. “What else can life do that we haven’t seen yet?” wondered lead researcher Felisa Wolfe-Simon.

5  Don’t try this at home: If uncoiled, the DNA in all the cells in your body would stretch 10 billion miles—from here to Pluto and back.

6  Most of that DNA resides not in the cell nuclei, which control heredity, but in our mitochondria, the organelles (units within cells) that generate metabolic energy.

8  Aside from bacteria, the smallest genome belongs to the intestinal parasite Encephalitozoon intestinalis, with a trifling 2.3 billion base pairs.

9  Scientists are working to create vaccines against HIV, flu, and hepatitis C from snippets of synthetic DNA; the DNA tricks the body into producing harmless viral proteins that train the immune system to attack real viruses.

11  At the Chinese University of Hong Kong, fetal DNA was extracted from a pregnant woman’s blood plasma and tested for Down syndrome. Prenatal DNA screening could someday replace amniocentesis.

12  Telomeres, sequences of DNA at the tips of chromosomes, get shorter every time a cell divides; when they get too short, the cell dies. Some scientists are trying to extend life by extending the telomere.

13  Good news if you’re a mouse: Researchers at Dana Farber Cancer Institute in Boston engineered mice with telomerase (an enzyme that adds DNA to telomeres) that could be switched on and off. With the enzyme activated, the mice grew new brain cells and lived longer.

14  Bad news if you’re a mouse: Scientists at Osaka University recently developed mice that are especially susceptible to DNA copying errors, seeking to increase the rate of mutations and see what new traits appear.

15  The results so far include short-legged mice, mice with fewer toes than normal, and mice that chirp like songbirds.

16  Guess who’s in your DNA? At least 8 percent of the human genome originated in viruses, whose genetic code was integrated with ours over roughly 40 million years of primate evolution.

17  Over the next five years, the International Barcode of Life Project aims to establish genetic identifiers for 500,000 species—short sections of unique DNA in the same location on the genome, a bit like the UPC on your box of Froot Loops.

18  Already, forensic specialists can identify criminals from traces of “touch DNA” left in finger­prints at a crime scene.

19  Next up: food forensics. British microbiologists sequenced DNA to identify the bacteria in a round of Stilton blue. They found that at least six microbial groups influence the flavor of the cheese’s “dairy matrix.”

20  And scientists at the University of Guelph in Ontario showed that DNA from the worm (actually an agave butterfly caterpillar) traditionally placed in bottles of mescal leaches into the liquor. So now we know: You don’t actually have to “swallow the worm” to swallow the worm.