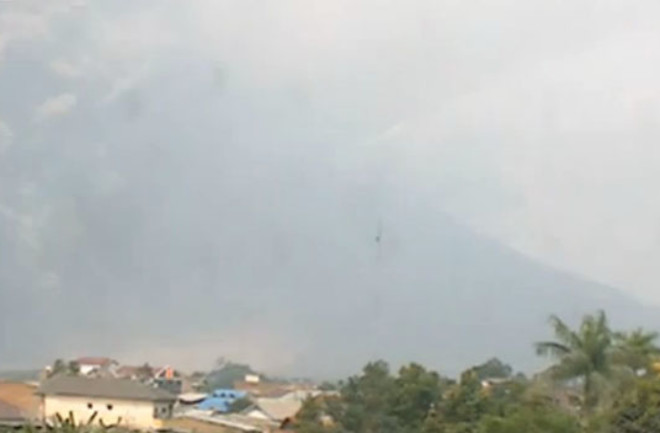 An eruption at Sinabung on February 1, 2014. The pyroclastic flow is headed off screen to the left -- it killed at least 14 people who were too close to the volcano. Image: PVMBG webcam Brief post today about the tragic events at Sinabung. The first deaths directly caused by the volcanic activity (as opposed to due to disease or illness in the refugee camps) occurred today as a pyroclastic flow swept through a town within the evacuation zone. Apparently people were allowed back into the evacuation zones this week to check on their homes, but with an eruption like we currently have ongoing at Sinabung, (CAUTION: the following link has images that could be disturbing) they were caught by a significant and unexpected explosion. At least 14 people died and another 3 were severely injured and based on some of the images I've seen, they clearly were killed in a pyroclastic flow as they show the effects of very high temperature exposure (I won't link to these images or video as they are very graphic). With the style of dome collapse eruptions, it is hard to predict when an eruption might occur -- it is dependent on when the dome can no longer remain whole and a part of it breaks off, so even if the overall activity at the volcano seems low, a new dome collapse could occur, triggering an explosion. This betrays the importance of keeping out of the evacuation zone even if it appears that the volcano is "quiet", because once a pyroclastic flow has begun, there is little-to-no chance of escaping if you are too close. UPDATE 9:00 PM EST: Here is an article from yesterday discussing the potential to reduce the exclusion zone around Sinabung after decreased activity during the week. Likely this plan has been scrapped. These people were apparently within 3 kilometers of the dome itself, so any pyroclastic flow headed in their direction would likely reach them in less than a minute. Some of the people killed were high school students and their teacher who were trying to observe the volcano and they could end up being a prime example of what happens when people begin to feel to "familiar" with the volcanic activity and thus came too close to the volcano. Hopefully, these deaths will remind people living near Sinabung that even if it seems unfair that they are being kept from their home as the activity waxes and wanes, if they return to these dangerous locations, they could find themselves victims of an unexpected eruption.