10 Quick Thoughts about Water on Mars 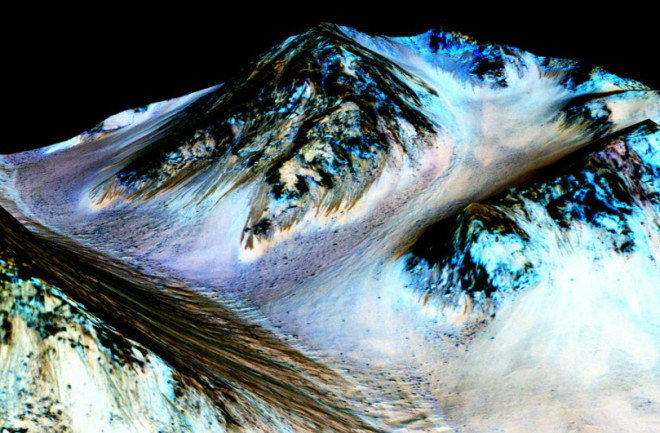 Here there be water? Dark streaks on Mars (presented in false color for clarity) indicate likely flows of salty water on the planet. Credit: NASA/JPL-Caltech/Univ. of Arizona NASA generated quite a bit of buzz today with the apparent discovery of flowing water on Mars. Now to anybody who follows science news--especially news about space and alien life--those words may sound awfully familiar. It seems like NASA has been discovering water on Mars every year for the last decade. This time really is different, however. For one thing, scientists are talking about water on Mars right now. For another, the evidence is much stronger than it was in past reports; I wrote about some of those earlier speculations here. Although the news just broke earlier today, there has already been extensive discussion of the results online. I've read through the early conversations (so you don't have to). Here are some of the key things you should know. I'll start with the bad news, since I always like to get it out of the way first. It's not exactly Club Med on Mars. This is not water just sitting on the surface. Let go of any images of lakes and rivers; the atmospheric pressure on Mars is so low that liquid water will immediately vaporize on the surface. The evidence is for seeps of salty water that flow down steep slopes, mostly the rims of craters, forming dark streaks. The water is cold. The streaks--technically known as recurring slope lineae--appear at temperatures as low as 10 degrees below zero Fahrenheit (-23 degrees Celsius). So also let go of any images of hot springs on Mars. The water is super-salty. You may be wondering how water stays liquid at -10 degrees F; this is the answer. Just as salt can melt ice on your sidewalk in sub-freezing weather, it can keep water liquid at the frigid temperatures of Mars. Other probes already found perchlorate salts on the Martian surface; the detection of these hydrated salts in the dark streaks, made by the Mars Reconnaissance Orbiter, was the clinching evidence that the dark streaks are formed by salty water. Salty Mars water is probably not suitable for life. This is the biggest downer in the NASA announcement: Percholorate-saturated water makes a lousy drinking fountain for Mars microbes, so this detection doesn't mean that we've found a viable habitat on Mars. OK, ready for some good news? Where there is some water, there is probably more. We don't know if the salts are absorbing water from the atmosphere or if the water is coming from some other source. Either way, today's news indicates that there is more water on Mars, moving in a more complicated cycle, than scientists thought before. That increases the likelihood that there are other spots (underground, almost certainly) that have more life-friendly water sources. In the words of Jim Green, NASA's director of planetary science, "Mars is not the dry, arid planet that we thought of in the past." We're going back to find out. NASA's Mars2020 rover (planned for--you got it--2020) will conduct sensitive measurements of the surface and atmospheric chemistry. The rover will also carry ground-penetrating radar that might be able to detect buried aquifers. This news greatly bolsters the case for Mars sample return missions. Both NASA and the European Space Agency are nominally committed to bringing pieces of Mars back to Earth, but NASA scrubbed a crucial precursor mission. Finding water on Mars boosts the scientific rationale for getting the program back on track. Labs on the ground can perform vastly more sophisticated analysis than is possible with a small, remote-controlled robot. We know how to get to the right places. Remember, the wet streaks are mostly on steep slopes where rovers, or even astronauts, would have a tough time exploring. But NASA's Jet Propulsion Laboratory has been experimenting with a variety of cliff-bots: climbing robots that could make their way down a crater wall and collect samples from the wet spots. All this can happen long before astronauts arrive. Keeping things sterile might actually be a harder task. NASA has strict "planetary protection" protocols to make sure the agency doesn't accidentally contaminate Mars with Earth microbes before we can find any local life. Water is an abundant resource. Today's announcement is just one more reminder that the fundamental ingredients of life--water and organic compounds--are extremely common throughout the solar system, and throughout the universe. There are water and carbon compounds in comets. There is water on the moon. There is water at Mercury's north pole! It's not that surprising, then, that there are places where liquid water persists on Mars. If life ever got started there, it probably still has many sheltered places where it could still be holding on. Finally, Mars is not the only place to look. Not by a long shot. Jupiter's moon Europa has a huge ocean, more than twice as large as all of Earth's put together, hidden just beneath its icy crust. Saturn's moon Enceladus has a buried ocean, too, and it shoots out geysers that contain salts and organic compounds along with water. Another moon of Saturn, Titan, is covered with lakes of liquid methane and sand dunes made of tar; its whole surface is one enormous carbon chemistry lab. All of these places are out there, waiting to be explored. The cost of going is not so great. The potential for discovery--truly revolutionary discovery--is huge. Follow me on Twitter: @coreyspowell