1. Higgs: What causes the weight of the world

Physicists have identified the "God" particle responsible for all matter in the universe, coming closer to a theory of everything. 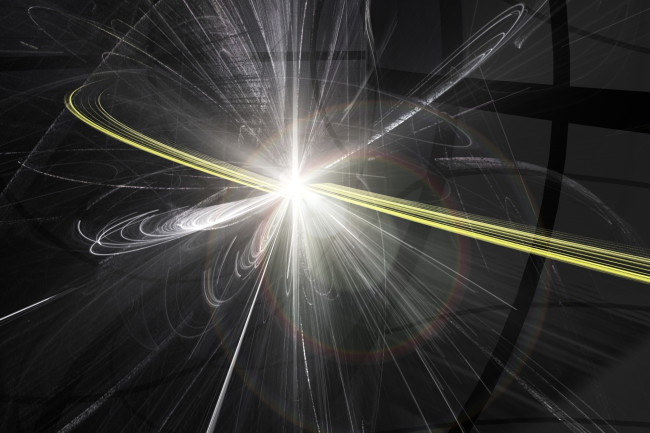 A decades-long, multibillion-dollar search paid off last July when physicists at the Large Hadron Collider near Geneva announced that they had discovered the Higgs boson, a particle so fundamental that without it there would be no atoms in the universe—and therefore no stars, no planets, and no one to wonder about it all. "It's kind of profound," says Joe Incandela, a physicist at the University of California, Santa Barbara, spokesman for one of the two teams that made the discovery and a master of scientific understatement. "We're still absorbing it ourselves. We've touched on something now that really is way beyond anything we’ve done before."

The Higgs holds a special place in physicists' hearts (and equations) because it helps explain a baffling dichotomy in nature: Why do some particles have mass, while others do not? Based on models of the Big Bang, physicists have inferred that the cosmos began as a ball of energetic, ephemeral particles, all moving at light speed. An instant later, some of those particles slowed down and acquired mass; these are now the protons, neutrons, and electrons that constitute every atom in the universe. Something gave matter its mass. Yet other particles, like photons (which make up light), remained massless.

In 1964 several theoretical physicists, including Peter Higgs of the University of Edinburgh in Scotland, tried to explain this dichotomy. They proposed that an invisible field pervades all of space. This so-called Higgs field essentially drags on certain particles and imparts them with mass. Photons travel freely through the field, never interacting with it at all. But for electrons, quarks (which combine to form the protons and neutrons in atoms), and other particles, the Higgs field is like an infinite, sticky ocean. Particles that interact most strongly with it have the most mass. Stars, planets, skyscrapers, your shoes, all the cells in your body—every piece of matter in the universe, when broken down into its simplest parts, derives its heft from the Higgs field.

Higgs’s theory was both grand and specific. Although the field itself would not be detectable, the theory also predicted the existence of a new particle that would be: the Higgs boson. It would be a particle like no other, representing not a building block of matter but a piece of space-time itself, a fundamental component that allows the material world to exist.

Experimental physicists were eager to hunt for the Higgs boson, but to do that they needed a particle accelerator that could reach extraordinary energies, similar to those that existed immediately after the Big Bang. And then any Higgs particle would exist for less than a billionth of a trillionth of a second. Decades of searches at two previous generations of accelerators—Europe's Large Electron Positron collider (predecessor to the LHC) and the Tevatron at the Fermi National Accelerator Laboratory in Illinois—failed to find the Higgs. Some physicists began to doubt its existence.

The $7 billion Large Hadron Collider represented physicists' last, best hope for finding the Higgs boson. Beginning in 2010, some 1,600 giant magnets inside a 17-mile-long circular tunnel began accelerating protons to more than 99.99999 percent of the speed of light and then smashing them head-on into each other at energies nearly four times higher than the Tevatron’s. When the protons collide they unleash a shower of particles. For every billion collisions, physicists expected to see one Higgs boson.

After analyzing 800 trillion collisions in two years’ worth of data, physicists at the LHC finally uncovered the traces they were looking for. On July 4, 2012, they officially announced the discovery of a particle that looks very much like the Higgs, saying that the odds of a false signal were less than one in 3 million. (Being good physicists, though, they are not ruling out the possibility that it is an even more exotic particle.) In particle physics, that’s as close as you get to a sure thing. Peter Higgs’s far-out speculations have been proved correct.

To researchers at the LHC, though, the discovery of the Higgs is a beginning more than an end. The enormous collider was designed to reveal new levels of reality beyond the standard model, the theory that has been the foundation of particle physics for the past 50 years. As successful as the standard model has been, it is clearly incomplete. It does not explain the perplexing phenomenon of dark energy, which is accelerating the expansion of the universe, nor does it account for dark matter, the invisible material that outweighs visible galaxies five to one.

The leading contender to extend the standard model and explain those mysteries is known as supersymmetry, which predicts that every known fundamental particle has a heavier counterpart, called a super-partner. So far scientists have found no sign of super-particles at the LHC, although there are hints that the Higgs is interacting with yet-to-be-discovered particles. To advance the search, scientists will shut down the LHC later this year to upgrade its equipment. When the accelerator switches on again in 2015, its proton beams will be almost twice as powerful. “That means we can look for supersymmetry,” Incandela says. “If we get to the higher energy and don’t find anything, that will be very troubling. We think there has to be something new out there.”