#1: Faster than the Speed of Light

Runaway subatomic particles seem to be  breaking the cosmic speed limit. If the results hold  up, physicists have some explaining to do. 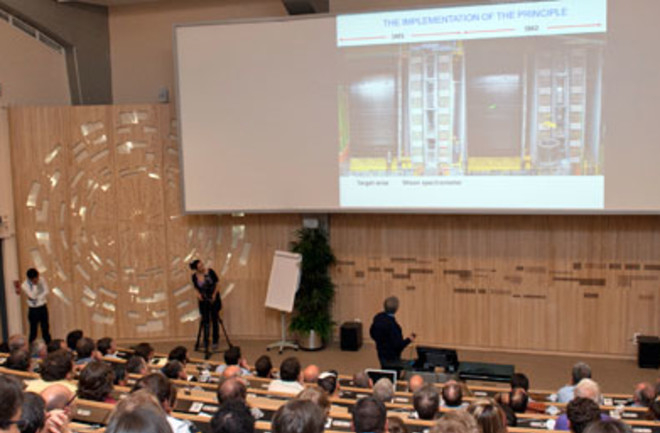 Seminar on OPERA results given by Dario Autiero (CNRS) | ©CERN

Einstein, relativity, and much of 20th-century physics have come under assault from an esoteric but far-reaching experiment. A collaboration of 174 physicists fired bursts of neutrinos from the headquarters of CERN, the European Organization for Nuclear Research, in Geneva, Switzerland, to a detector in Gran Sasso, Italy. They tracked 16,111 of the ghostlike particles and measured how long they took to complete the trip. After three years of experiments and intense analysis, the team reported in September that the neutrinos were arriving one 17-millionth of a second early.

The minuscule discrepancy revealed by the experiment, dubbed OPERA (Oscillation Project with Emulsion-tRacking Apparatus), has staggering implications. It seems to indicate that the neutrinos were traveling faster than light, violating what has long been regarded as an ironclad cosmic law. If neutrinos really can do that, then Einstein’s theory of relativity, the backbone of modern physics, could break down. Time could flow in reverse. Neutrino-based messages could reach recipients before they were sent. An effect could precede its cause, which would explode our entire way of thinking about the universe.

The result was so peculiar that the CERN physicists encouraged other scientists to look for design errors in their experiment. Many quickly obliged, but physicist and Opera spokesman Antonio Ereditato says that a lot of the critiques have been overly simplistic: “We are not so stupid, ok? These are mistakes we don’t do.” The group did receive some good ideas and suggestions, he adds, but found no smoking guns. Even the most skeptical scientists agree that the experiment was carefully performed and analyzed.

That credibility has led some brave physicists to confront a question both daunting and electrifying: What if the Opera results are correct and neutrinos really are thumbing their noses at Einstein? Relativity has been experimentally validated so many times over the past century that no respectable physicists are calling for its death. Instead, when the neutrino results emerged, theorists rushed to propose addenda, including grand visions of new forces and extra dimensions, that could account for the Opera findings and keep relativity intact—much as relativity elaborated on Isaac Newton’s model of physics but did not invalidate it.

One of the most intriguing ideas comes from Jarah Evslin, Emilio Ciuffoli, and Xinmin Zhang of the Chinese Academy of Sciences in Beijing, who are using one unexplained phenomenon to account for another. Dark energy is a mysterious kind of antigravity thought to operate on a cosmological scale, pushing galaxies apart and causing the universe to expand ever-more quickly. Evslin and colleagues propose that dark energy changes its behavior in the presence of large masses like Earth. It could be scrunching space-time together near the planet so that the neutrinos’ route becomes slightly shorter—20 meters shorter, to be exact—than the measured value of 730,534.61 meters. “It creates a shortcut,” Evslin says. “The neutrinos see the distance between CERN and Gran Sasso as being less than we do.” If the particle is traversing a smaller distance (from the neutrino’s perspective) in the same amount of time, its speed dips below that of light, preserving relativity.

Particle physicist Argyris Nicolaidis of the University of Thessaloniki in Greece suggests that neutrinos might take another kind of shortcut, one that passes through an extra, hidden dimension. Some versions of string theory, an all-encompassing theory of particle physics, suggest that our three-dimensional universe could exist within a four-dimensional sheet called a brane. (By analogy, think of the universe as a picture imprinted on an enormous piece of paper.) This brane may, in turn, occupy a higher-dimensional space known as the bulk. Most of the particles in our universe stick within the brane, but theorists have proposed that some neutrinos might be able to travel through the bulk as well. If our brane is folded over itself, then passing between the folds could offer a shorter path between two points. By taking an excursion through the bulk, Nicolaidis explains, the neutrinos do not have to travel as far to get from Switzerland to Italy. “That gives you an effective speed which appears faster than the speed of light,” he says.

Both of these theories preserve relativity, and in so doing largely eliminate the possibility that neutrinos could move backward in time. Given the paradoxes of time travel, this is good news for physicists but heartbreaking for anyone who entertains hopes of hopping into a DeLorean for a visit to the Old West. “You could send a message that travels faster than light,” Nicolaidis says, “but you could never send a message that arrives before it is sent.”

While the interpretations percolate, Ereditato says his Opera colleagues have been repeating their experiment with a different neutrino beam that should rule out potential sources of error. Other physicists are considering follow-up experiments to retest the cosmic speed limit. Reaching a definitive conclusion could take years, however. “There will be a lot of ideas along the way, and the right ideas will float to the surface if they are experimentally verified,” says Ed Kearns, a Boston University neutrino physicist.

Kearns doubts the CERN results will stand up to the further tests, but he hopes to be proved wrong: “As scientists, we’d rather break something and find new ways to explain the universe than just keep confirming the standard model over and over again.”

The Perils of Messing With Relativity

Einstein’s theory of relativity was rooted in a simple thought experiment: What would happen if someone traveled alongside a beam of light? In 1905 that mental image led the wild-haired genius to special relativity, which holds that the laws of physics look the same to every observer. If a man on a train traveling at 70 miles per hour turns on a flashlight while his partner on the ground does the same thing, they both see their beams of light moving the exact same way, at 186,282 miles per second. Now the weird part: If they look at each other’s beams, they still agree on the speed of light. To the man on the ground, the light on the train does not pick up an extra 70 miles per hour of velocity.

That seeming paradox led Einstein to conclude that space and time are malleable things that become distorted at high speeds and fall apart entirely at the speed of light. A decade later he developed the general theory of relativity, which explains gravity in terms of the curvature of space and time. Einstein’s special role for the speed of light, designated by the letter c, is baked right into his equations (think E = mc2). Use these equations to describe a faster-than-light neutrino and you get nonsense: Anything moving that rapidly would have imaginary mass and travel backward in time.

That is why the Opera result has raised such a ruckus. “One data point can disprove an entire theory,” says theoretical physicist Michio Kaku of the City University of New York. “Even Einstein can be disproved.” Still, relativity has been confirmed thousands of times. It allows astronomers to measure the properties of stars, engineers to design GPS satellites, and nations to build hydrogen bombs. Whatever theory comes next, then, must incorporate all of relativity while accommodating results that seem to contradict it. Solving that paradox will surely require another bona fide genius.—Andrew Grant