Zoom Contact Lens Magnifies Objects at the Wink of an Eye 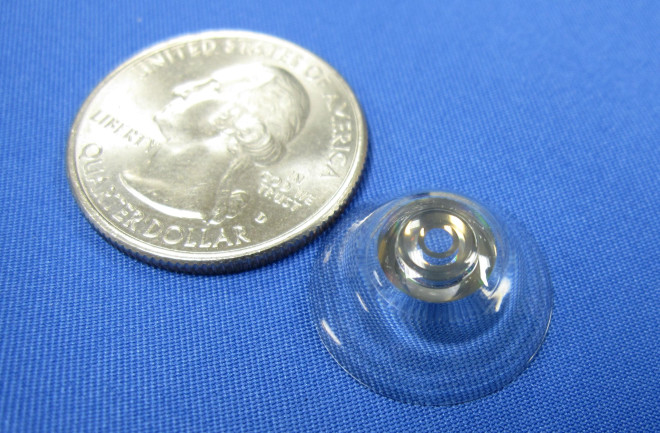 This telescopic contact lens can make objects appear 2.8 times larger with the blink of an eye. (Image: Eric Tremblay and Joe Ford. Courtesy of EPFL) Swedish optics researchers are developing contact lenses that can zoom in on an object with the blink of an eye. The prototype lenses, unveiled Friday at the American Association for the Advancement of Science annual meeting, can magnify objects up to 2.8 times and could someday be useful for patients with macular degeneration, a major cause of blindness and visual impairment in older adults. A simple wink activates the telescopic lens, which could help people read and recognize faces more easily.

Zoom In, Zoom Out

The telescopic lenses aren’t technically new: the first operational prototypes were unveiled in 2013, but they weren’t quite ready for people’s eyeballs yet. For one, the magnification was always on, so the only way to deactivate them was to take them out. Secondly, the original lenses weren’t gas permeable, which meant you couldn’t wear them for very long. But two years later the development team, led by Eric Tremblay of the Swiss Federal Institute of Technology in Lausanne, has refined their design and they believe the telescopic lenses are ready for human trials. So far, they’ve only tested their lenses on a mechanical model. The new prototype features small air channels that allow oxygen to flow through the underside of the lens to reduce eye irritation. Designers also incorporated electronic glasses into their setup. Winking activates a polarized filter in the glasses that directs light into the telescopic section of the contact lens. When you wink the other eye, the glasses allow light to pass through the lens normally once again, returning vision to its unassisted starting point.

The telescopic contact lens is just one of a handful of advances in futuristic eyewear. Google’s clinical researchers in 2014 unveiled contact lenses that can monitor glucose levels in a wearer’s tears and transmit data wirelessly to a connected device. In March 2014, researchers from the University of Michigan announced that they had built graphene sensors that could be incorporated into contact lenses to give users night vision. We’re not certain when these futuristic lenses will hit the market, but science is certainly changing the way we view our world.