Zap! I Sunk Your Battle Ship... With a Laser 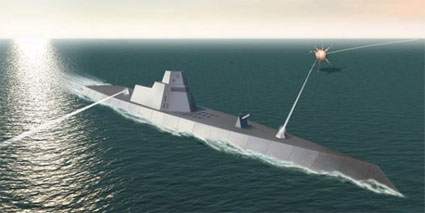 Weapons-grade lasers still sound like the stuff of science fiction, but thanks to a major breakthrough by researchers at the Los Alamos National Lab in New Mexico, the Navy has taken a big step toward making this bit of sci-fi real. With the Free Electron Laser (FEL) program, the Navy hopes to use laser beams to blast enemies out of the sea and sky, and for the first time, they're starting to generate enough power to do so, with the newfound ability to create a megawatt-level laser beam.

"The injector performed as we predicted all along," said Dr. Dinh Nguyen, senior project leader for the FEL program at the lab. "But until now, we didn't have the evidence to support our models. We were so happy to see our design, fabrication and testing efforts finally come to fruition. We're currently working to measure the properties of the continuous electron beams, and hope to set a world record for the average current of electrons." [Office of Naval Research]

To generate a death laser, scientists use an injector to charge electrons, and then pass these highly-charged particles through magnetic fields until they emit laser light. The hardest part of the project, or course, wasn't merely to generate a laser: it was to cross certain thresholds so that the laser would be more than a pesky, very bright light. http://www.youtube.com/watch?v=fWdGkb7r1iA&feature=player_embedded

One of the biggest hurdles the superlaser program has faced is how to generate the minimum 100 kilowatts of power needed to turn the Free Electron Laser (FEL) from an annoying light to shine in other ship’s eyes [sic] to an apocalyptic beam of destruction. Until now, the prototype laser has only been able to generate about 14 kilowatts, but the Navy believes it has breached a power barrier. Scientists at Los Alamos National Lab in New Mexico tested a new injector on December 20 that produced enough electrons to “generate megawatt-class laser beams for the Navy’s next-generation weapon system.” [Digital Trends]

So what's so great about using lasers as weapons? And is that the only thing they can do?

[The] arrival of a superlaser for maritime defense is a potential gamechanger. It would represent a speed-of-light weapon that never has to be reloaded, feeding on a ship’s generator, to burn through incoming missiles or aircraft. And that’s not all: program manager Quentin Saulter told Danger Room in November that the Free Electron Laser can be used as a sensor, a tracker or a guidance system for a ship’s conventional weapons. [Wired]

But even though the Navy is now nine months ahead of schedule in their death-laser goals, don't expect to see these beams emanating from ships anytime soon; the first maritime tests of the Free Electron Laser are scheduled for 2018. Until then, the Sun will cling to its spot as the greatest photon emitter on the seas. Related Content: Discoblog: How to Repel Pirates? Blast Them With a Laser Cannon Discoblog: Recycled-Plastic Boat to Sail the Pacific; Somali Pirates Unimpressed Discoblog: Lasers Gone Awry: Russian Ravers Partially Blinded by the Light 80beats: Is the Anti-Whaling Activist Who Boarded a Japanese Whaling Ship a Pirate? 80beats: Peeping Tom Camera Uses Lasers to Peer Around Corners 80beats: High-Tech Fizzle: Laser-Bearing Jumbo Jet Fails to Destroy Test Missile