Your Personal, Automated Mass Transit Vehicle Is on Its Way

Get out of your car and into your flying train,  superclean superbus, and most impressive of all, your personal subway. 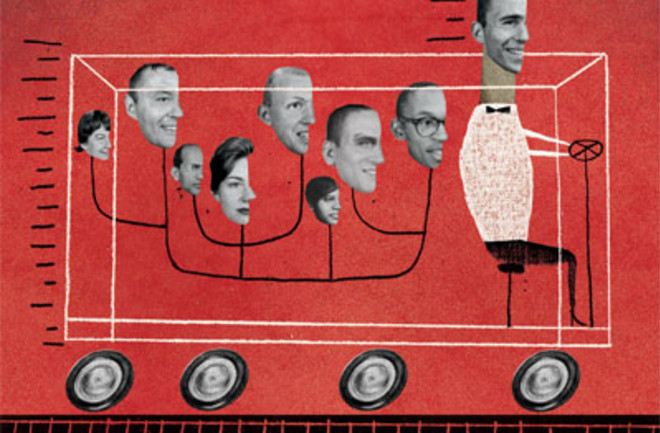 Mass transit is getting friendlier with smartphone apps like Embark, which tells commuters when the next bus or subway will arrive.   | Illustration by David Plunkert

Despite my mania for all manner of irresponsible personal vehicles, I’m actually a public-transportation nut. A few of the reasons: • I can read, check email, send text messages, or catch a few winks while I’m zipping to my destination • I have built-in motivation for walking, given that I have to get to and from the bus or train stop • I feel good that my ride isn’t fueled by the conversion of fossilized sea life into impending climate catastrophe • I get to trade small talk and occasional newspaper sections with fellow transit riders.

But I know you have your very good reasons for being among the 98 percent of the population that shuns public transportation: • You can read, check email, send text messages, or catch a few winks while you’re swerving into oncoming traffic and pedestrians • You have built-in motivation for stopping at Wendy’s for celebration takeout, given that you haven’t had to walk more than nine consecutive steps the entire day • You feel good about the copious burning of hydrocarbons, which is creating valuable new beachfront property • You get to trade hand gestures and occasional gunfire with fellow traffic jammers.

Ok, go ahead and sneer at my bus through the windshield of your Range Rollover. Thanks to some snazzy high-tech upgrades coming to public transit over the next several years, I’ll have the last laugh. Surely you’d envy me, for example, were my bus to suddenly lower four large metal wheels next to its tires and jump onto nearby rail tracks to go roaring off past your Toyota Highballer and all the other traffic. Or were my bus to pass over the roof of your Porsche Careen, supported on giant stilts with wheels that ran on either side of the road. Or, perhaps most impressive, were my commuter train to fly by you—really, actually fly by, lifted a few feet in the air by side-mounted wings.

Well, get ready to gawk. The next time you’re in Asia, that is, because the track-riding bus and the flying train are Japanese projects in prototypes (at Toyota and Tohoku University, respectively), and a stilted bus has been developed in China.

Sadly, the west lags the east in enthusiasm for visionary, if slightly deranged, transit schemes. That’s partly because we lack the motivation provided by the epic traffic jams in some Asian countries that can leave drivers stuck for as long as days, notes Jerry Schneider, a civil engineering professor emeritus at the University of Washington at Seattle, who continues to study rapid transit. “Their situation is much worse than ours, and getting worse,” he notes. China built 18 million cars in 2011, more than the United States did and a third more than the number from just two years earlier.

But the United States doesn’t exactly suffer from a traffic shortage, and I’m not the only one here who would just as soon opt out of the SUV demolition derby playing out daily in our streets. Public-transit ridership has in fact been steadily rising in this country since 1995, and the coming wave of baby-boomer retirees will most likely keep pushing those numbers higher. In response, the Western half of the U.S., which has long trailed the Northeast in developing mass transportation, is in the midst of a 20-year, $150 billion public-transit spree. Salt Lake City alone has invested $3 billion since 1999.

No flying trains headed for anywhere in the U.S., but Schneider points to a slightly less radical approach to tomorrow’s transit that could pick up some of that money: personal rapid transit. PRT, as transit geeks call it, is sort of like a miniature trolley or monorail, but utilizing much smaller, driverless vehicles that don’t run scheduled routes.

The point is to eliminate the four main reasons people whine about mass transit: having to get to and from a station or bus stop; having to wait for the bus or train to arrive; having to make a bunch of stops and possibly change buses or trains; and being stuck with a large group of people who may be as crabby as you are about the whole ordeal. “It can be difficult getting to a station, and then the train takes you somewhere you don’t particularly want to go,” as Schneider puts it.

Because PRT vehicles are just large enough to hold around five people, their track and stations can be smaller and hence much, much cheaper—about one-fifth the $100-million-per-mile cost of a conventional light-rail system. Lower cost could make it economically feasible to build far more stations, so you shouldn’t have to go far to get to one, and the boarding stations could even be built into buildings.

What’s more, PRT schemes call for cars to be summoned on demand, sort of like an elevator, and there would be so many cars in the system that you wouldn’t have to wait much more than 30 seconds for your ride. The cars would then zip you under computer control more or less straight to your destination without stops, since you would most likely be the only passenger aboard. Most PRT cars currently in use have carlike rubber tires that run not on tracks but on tiny streetlike elevated “guideways,” so that in theory they could be set up to hop off the guideway and head down regular roads right to your front door, like a big runaway Roomba.

All this isn’t just some transit planner’s fantasy. Several companies—including ULTra in the U.K., Vectus in South Korea, and Skyweb Express in Fridley, Minnesota—are building PRT systems, and modest-size ones are operating now in Abu Dhabi in the United Arab Emirates and at Heathrow Airport in London. Others are going up in India and South Korea; a few U.S. cities, including Ithaca and San Jose, are currently studying their options. (In the meantime, remind me to plan more trips to Abu Dhabi.)

The advantages of PRT are less clear in cities like Boston that already have old-fashioned, full-scale mass-transit systems. How can the technology help me feel even more smugly self-righteous when I take the bus and subway?

By giving conventional systems PRT-like upgrades, says Vincent Valdes of the Federal Transit Administration. Buses will ditch their loud, smelly engines, he says, and streetcars will lose the cityscape-scarring overhead wires, swapping them for relatively small, light battery packs. Electric coils buried just below the street surface will transmit energy through the air into the vehicles passing over, a technique called induction charging. No plugs, no time-sucking recharging breaks, no need for battery packs the size of a small swimming pool. Computerized traffic-light systems will open up green lights for buses and—in answer to my biggest complaint about buses—computerized driving assistants will keep bus drivers from unnecessarily hammering the gas or brakes, swerving in and out of lanes, and taking curves at NASCAR speeds. “People tend to look at buses in the U.S. as second-class travel, and it doesn’t help if the driver is driving like he’s Evel Knievel,” Valdes says. “But with the right technologies buses will seem more like rubber-tired trains.”

PRT approach could even invade the domain of the “pry my steering wheel out of my cold, dead hands” crowd, transforming privately owned cars into a part of a new kind of mass-transit system. Cars, after all, can be shared, and there are already phone and web apps in parts of the U.S. and Europe, such as Ridejoy in California, that match people with room in their cars to people who need rides to the same destination and are willing to share costs.

Anticipating the next step, researchers at MIT have proposed a scheme called CityCar in which compact electric vehicles would be scattered in parking stations all around cities, enabling riders to jump into one and drive it to the station nearest their destination, then leave it for the next rider, much like the shared-bicycle systems that have sprung up in cities around the world.

“We’re seeing the blurring of edges between traditional transport modes,” says Nigel Wilson, an MIT civil engineering professor who specializes in public transportation. “Traditional public transit can satisfy only a small percentage of the trips people need to take, so we need to think of a combination of services and modes that provide an attractive alternative to relying on your own car for all your trips.”

That’s fine with me—I’m in no hurry to give up my Alfa Spider or two motorcycles. But I’m still captivated by that winged, flying train, though I’ve suggested one small modification to the developers: Equipping it with an air-to-ground missile that zeroes in on SUV-based text-messaging signals. I wouldn’t want an errant Dodge Derangeo forcing an unscheduled landing.