You Can Play Pictionary with Google's AI 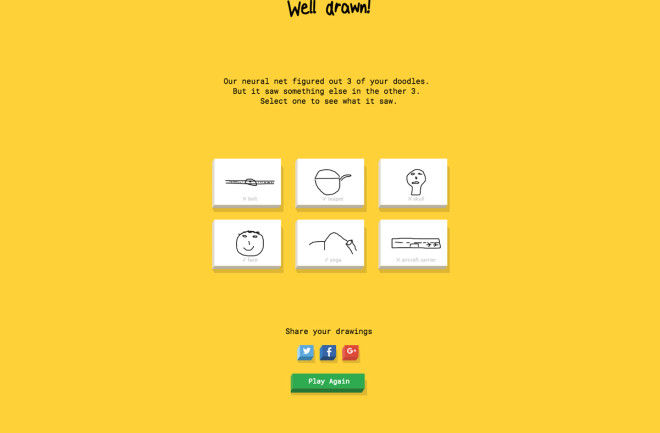 Clearly the author doesn't often make tea. With a new collection of eight experiments, Google is opening up its artificial intelligence research to the masses. Encompassing a few different areas of AI research, the various experiments allow you to play, draw and type along as the computer attempts to guess what you're up to. The goal is two-fold: allow the uninitiated to experience AI for themselves, and help train the AI. Every time you participate in one of the experiments, you add a little more data to help the computer fine-tune its decision-making algorithms. For example, in the drawing experiment, you're asked to sketch six objects and given 20 seconds to do so. As you doodle, the computer guesses what you're drawing, based on its previous experience. Both correct and false guesses strengthen its confidence, and make it just that much more likely to pick the right answer next time. A "Giorgio Cam" combines image recognition with musical creation. Take a picture of an object, and the AI will guess what it is, and then set its guess to a beat courtesy of legendary Italian electronic music pioneer Giorgio Moroder. Each guess is accompanied by percentage indicating how confident the program is that its guess is correct. Another experiment explores sonic inputs, grouping a variety of everyday sounds by similarities to form a cloud of interrelated clicks, clangs and crackles. Using the simple controls at the bottom, users can loop various combinations of sounds to create their own naturally-sourced beats.

The Infinite Drum Machine. There's a also a section devoted to AI programs that meld art and code, such as an algorithm that groups artwork by content and visualizes each piece as a 3-D landscape you can travel through. Another connects pieces of art with one another by tracing a path through thematically similar pieces until the two are linked. This is a demonstration of how AI learns — by finding the connections between similar objects or concepts and then expanding that web of connections until even disparate things make sense. Google has also put out a call for developers to add their own AI algorithms to the collection. All of the code for the experiments is open-source, and developers are invited to play around with the algorithms and put their own spin on the technology.