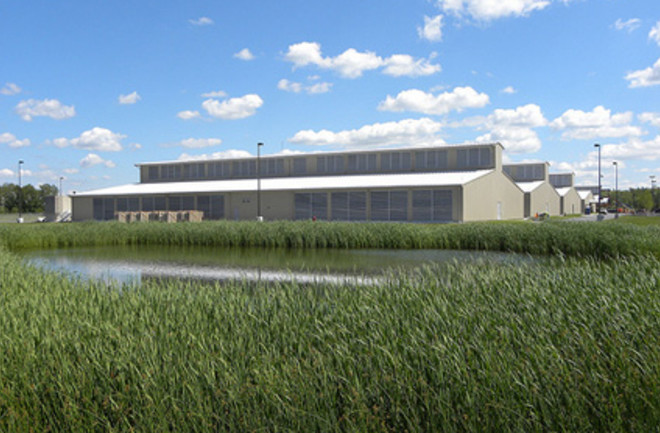 Data centers are energy hogs. They run around the clock, sucking down power. So to save some public face (and save on their electric bills), some IT giants are experimenting with how to make their data centers much more efficient (pdf). Enter Yahoo's new building out in Lockport, New York, near Niagara Falls. It's high-tech inspired by low-tech.

Those server buildings have been nicknamed the "Yahoo Chicken Coop" because they resemble their long, narrow design. This helps encourage natural air flow, however, which Yahoo said means that less than 1 percent of the building's total energy consumption will be for cooling purposes. [PC World]

Architecture isn't the only energy-saver. The local climate helps, too.

Yahoo owes most of the credit to the Lockport location: the cool climate, regular winds and proximity to ample hydropower. But the company capitalized on those things with a smart design and use of more efficient technology, something that other tech companies could easily replicate. [EcoGeek]

The design plus the climate should save the data center plenty of water, too, because it won't need giant chillers to keep the space cool. This green design earned Yahoo a lot of positive attention and gushing over the company-provided statistics

The global IT industry is estimated to account for 2 percent of the world's carbon emissions and data centers are the fastest growing contributor to the 2 percent emissions rate. [The Independent]

The chicken coop design itself was made possible by a grant of nearly $10 million by the Department of Energy, and presumably the government won't fund a green design for every data center. Yahoo also didn't maximize the number of servers in the space but prioritized energy efficiency instead, so it might be difficult to do many data centers this way. Still, while being realistic, I don't want to be a killjoy here. This design is clever, and hopefully energy thriftiness moves beyond this unit and becomes an industry trend. Related Content: Joe Genius: Green Power

(DISCOVER's online TV show tells you how to get around and use less energy doing it) 80beats: California Pushes Ahead With Massive Solar Thermal Projects