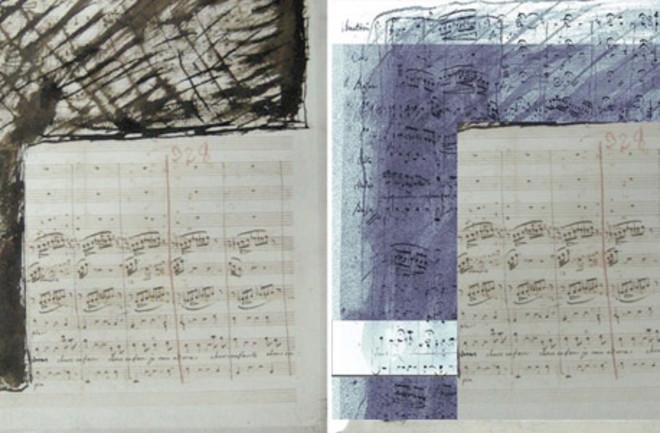 On left, thick smudges black out parts of an aria from Luigi Cherubini's 1797 opera 'Médée.' On right, the same page as seen with iron fluorescence x-ray image in false color. Photo courtesy Uwe Bergmann / SLAC Whoever thinks that physicists can’t enjoy the artistic side of life should visit the SLAC National Accelerator Laboratory at Stanford. Researchers there have used the power of science to reveal for the first time in more than 200 years the full score of an 18th century opera, Médée. When Luigi Cherubini, one of his era’s best composers, wrote the opera in 1797, it was criticized for being too long. Allegedly, Cherubini angrily blacked out the final lines of the aria “Du trouble affreux qui me dévore” (“The terrible disorder that consumes me”). Whatever the reason behind it, the lines of music have been lost ever since, blacked out behind thick carbon. Recently a visiting German scholar at Stanford knew about the opera, and became curious if SLAC’s X-rays could reveal the missing music. When the X-rays (basically just extra-energetic light) hit the blacked out music, they reacted differently to each material on the page: the ink Cherubini wrote with, full of iron; the printed lines of the musical staves on the page, full of zinc; and the charcoal smudges and the paper itself, full of carbon. The physicists scanned the aria in lines just 50 microns across, taking about eight hours per page side. Soon, the “lost” notes began to appear, along with the notes on the other side of the page — the technique was working too well! This required just a simple fix, though: going through and individually noting, by hand, on which side the note’s head connected to its stem. All told, it took one night to reveal the music that had been missing for centuries. (Listen to the resurrected score here.) Now, whenever anyone studies the restored score, they’ll also notice in the liner notes a special thank-you to the physicists at SLAC who made the music possible.