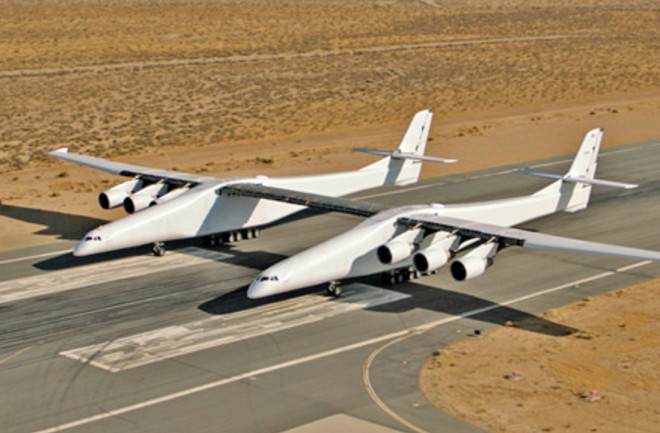 The Stratolaunch on the runway. (Credit: Stratolaunch Systems Corp.) The world's largest airplane is taking to the runway. The massive Stratolaunch aircraft developed by Microsoft co-founder Paul Allen conducted a taxi test over the weekend in Mojave, California where the aircraft reached a speed of 46 miles per hour. With a wingspan of 385 feet, and powered by six Pratt & Whitney turbofan engines, the ungainly craft is meant to give rockets a ride to the stratosphere, where they will launch into orbit.

Gearing Up For Flight

The test follows earlier demonstrations of the 500,000 pound aircraft's taxiing abilities in December, and moves the company further toward flight tests, although no date for those has been set. The dual-fuselage plane was built by California aerospace company Scaled Composites, which won the Ansari X prize in 2004 with their SpaceShipOne, a reusable rocket-powered airplane.

Captured new video of @Stratolaunch plane as it reached a top taxi speed of 40 knots (46 mph) with all flight surfaces in place on Sunday. The team verified control responses, building on the first taxi tests conducted in December. pic.twitter.com/OcH1ZkxZRA

Allen's goal is to send rockets into space by strapping them between the plane's fuselages and ferrying them to altitudes of around 35,000 feet, where the rockets will proceed under their own power. It's how SpaceShipOne made its way to space, and the technique is also being tested by spaceflight company Orbital ATK, NASA and Virgin Galactic. Launching from high above the Earth means there's less air pressure, reducing drag and improving rocket performance. Crucially, it also adds an element of adaptability to rocket launches. Taking off from a fixed pad means that launches must happen during narrow windows when a rocket's target is in orbit and weather conditions are right. Launching from a plane means the rocket can move to wherever it's needed. The drawback, however, is that payloads are much smaller. Stratolaunch will be able to carry just 5,000 to 10,000 pounds of crew and equipment into orbit, according to NBC News

. SpaceX's Falcon 9 can carry around 50,000 pounds to low-earth orbit, and 18,000 pounds to higher geostationary transfer orbits. The Soyuz rockets NASA currently relies on to launch astronauts to the International Space Station can carry more than 10,000 pounds, as well. Stratolaunch would most likely be deployed to launch smaller satellites, as well as astronauts into orbit. It's a business that's likely to continue to grow

in coming years. When the Stratolaunch does make it into the air, it will be the largest airplane ever to fly, besting even the infamous Spruce Goose, which had a wingspan of 320 feet. That plane was built during WWII by Howard Hughes and meant to transport troops and equipment to Europe. It made only one flight, in 1947.