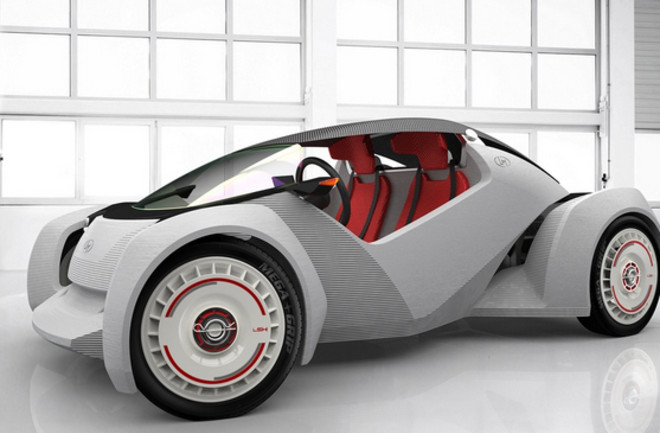 A prototype of the Strati, a 3-D printed vehicle. (Credit: Local Motors) Henry Ford’s assembly line famously transformed the automobile industry in the 20^th century – and a new company is hoping to bring about a similar revolution in the 21^st, with its recently unveiled 3-D printed vehicle. The company is Local Motors, designers of the Strati. The car was printed in about 44 hours on site earlier this month at the International Manufacturing Technology Show in Chicago. In contrast to the thousands of components in a traditional vehicle, the Strati consists of fewer than 50 parts. Most of its body is built from extruded plastic of the kind that Lego bricks are made of. That makes it both drastically simpler, and potentially cheaper in the future, than conventional cars. “If this works, even a little, it will reform parts or all of the industry,” Local Motors CEO Jay Rogers told Fox News.

The Strati is a sleek two-seated, roofless electric vehicle that weighs about 2,200 pounds with all its non-printed parts attached. Most of the car was constructed in a shipping container-sized 3-D printer, which used nozzles to squirt layer after layer of a carbon-reinforced thermoplastic to construct the chassis from the ground up. The end product looks a lot like a topographic map of an Italian roadster (see the assembly video below). The primary advantage of 3-D printing the Strati is that most of the chassis components are already complete after it comes off the printer. Once the steering wheel, shocks, tires, electric motor are all quickly installed, it can be driven off the lot. The Strati can reach speeds of about 40 miles per hour and can travel 120 miles on a charge, but a gas engine could also be fitted. Local Motors expects the Strati to retail for about $18,000.

The main components of the Strati. (Credit: Local Motors)

The Future of Buying a Car

Reducing the number of parts required to build a vehicle would lower costs and streamline production. Further, vehicle designs could be rapidly altered without waiting for a supply of new parts to be machined. More alluring, however, is the very realistic notion that you could pick all the specifications you need in a new vehicle, press print, and drive it home the same day. Heck, you could even print a car from home; the Strati design is publicly available. However that's some way off. For one thing, the Strati's current materials aren't really feasible for production, as Local Motors engineer James Earle explained to the New York Times:

When asked what would happen in a crash, though, Mr. Earle, driving the two-seat car, said it would be like a rock slamming against a brick wall.

However, Local Motors hopes to continue improving its thermoplastic recipe to improve strength and safety. Tinkerers, start your engines.