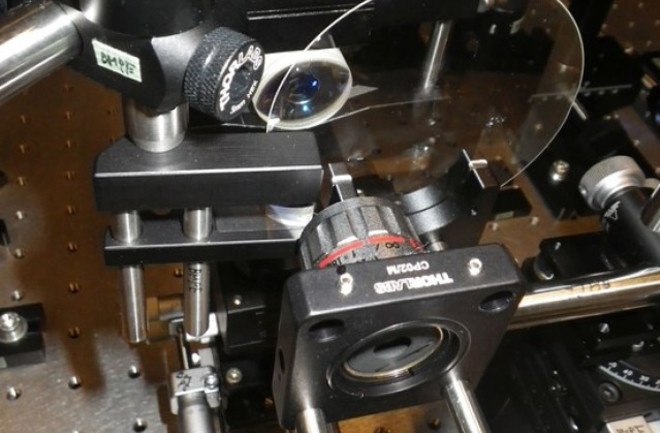 The STAMP camera. Credit: University of Tokyo Researchers in Japan have built a camera capable of recording 4.4 trillion frames per second, making it possible to visualize heat conduction and chemical reactions — things in nature once thought impossible to photograph. The team of 12 researchers from the University of Tokyo and Keio University call their technique Sequentially Timed All-optical Mapping Photography (STAMP). Researchers say their new camera is now the fastest in the world, and could be used in both medical and manufacturing industries.

If you film a stormy sky with a camera shooting 6,500 frames per second, you can slow down lightning and watch it crawl through the clouds. At 4.4 trillion frames per second, the team’s new camera can capture chemical reactions that occur at one-sixth the speed of light. Currently, high-speed cameras using electronic shutters shoot images consecutively in one-billionth of a second. The STAMP camera’s optical shutter, by contrast, allows it to shoot images consecutively in less than one-trillionth of a second, the Wall Street Journal reports. Researchers say their technique is over 1,000 times faster than the high-speed cameras currently in laboratories.

The STAMP camera can film in super slow-motion by sending a burst stream of timed photographs. A mapping device then assembles these photographs in sequential order to show an object’s “time varying spatial profile.” The resulting photos are 450 x 450 pixels, enough resolution to give scientists a good look at things previously unseen. Researchers described the new technology last week in the journal Nature Photonics. Right now, the STAMP camera is about one square meter in size, and researchers hope to make the device smaller and more practical over the next few years. Their camera will certainly bring new perspective to processes that were previously invisible such as laser processing or ultrasonic therapies. The camera could be ready for use in the field by 2016, the Telegraph reports.