Woolly Mammoth Cloned Within Five Years? We'll Believe It When We Ride It 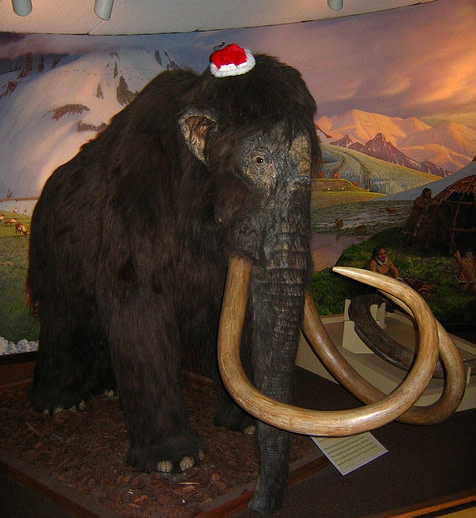 Japan's Kyodo News reports that Russian and Japanese scientists will start a project early next year to clone the woolly mammoth. The researchers also confirmed that a well-preserved mammoth thigh bone found in August contains remarkably well-preserved marrow cells. The team, including researchers from a Siberian mammoth museum and Japan's Kinki University, plan to extract an undamaged nucleus from the extinct animal's bone marrow and insert it into the egg of an African elephant, a related animal; if all goes well the elephant could then give birth to a baby mammoth. The team has worked toward cloning the beast for more than a decade but until August, hadn't found a sufficiently intact source of mammoth DNA (although they did create a copy of mammoth hemoglobin). What could possibly go wrong? Assuming scientists can extract an undamaged nuclei from tissue that's been frozen for more than 10,000 years, they then need to successfully insert it into an African elephant's egg. This won't be simple, considering that even procuring elephant ova is a challenge, said Japanese researcher Akira Iritani. And the cloning success rate for (non-extinct) animals like cattle is only 30 percent. The cloning technique Iritani plans to use is also relatively new; it was developed three years ago by researcher Teruhiko Wakayama to clone a mouse using cells that had been frozen for 16 years. Even if the initial embryo is cloned successfully, it must gestate within the body of an African elephant for more than one year (which has obviously never been attempted before). Then, if it's born, it must survive. This didn't work out so well for the recently extinct Pyrenean ibex, which was brought back to life in 2009 using 10-year-old DNA from the animal's skin. Unfortunately, the newborn cloned ibex died within minutes of its birth due to breathing difficulties. But if the mammoth clone can survive, we're all for it. Unless it doesn't particularly appreciate being brought back to life just as the Earth warms anew. Despite all these obstacles, Iritani says a cloned mammoth is likely within the next five years. But those putting money on it beg to differ. As The Scientistpoints out:

Consummate gamblers were quick to add their two cents. Not long after the announcement, Irish betting company Paddy Power began taking bets on whether the ice age giants can be cloned within 5 years. Short-term odds are gloomy, with 8:1 against a cloned wooly mammoth by 2014 and only 5:2 for a 2017-2018 finish date.

, Via The Mainichi Daily News