With a Floating Bead, This Device Makes Truly 3D Holographs 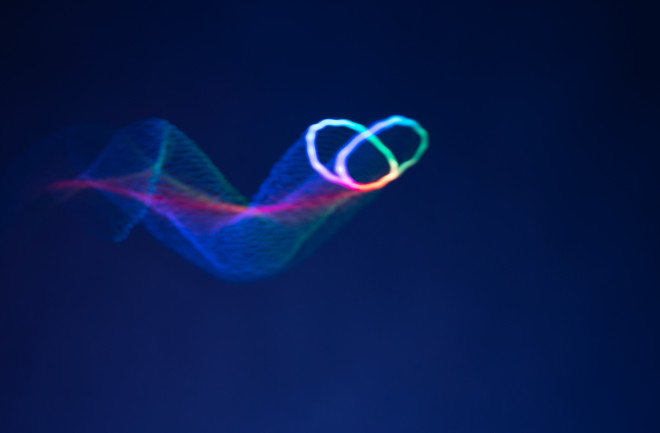 With the help of sound waves and a small plastic ball, researchers in the U.K. have designed a machine that generates truly 3D holographs.

The whole system is slightly smaller than a shoebox and makes simple images, like a butterfly or smiley face, that are less than an inch tall. Described in Nature, the device is one of the first 3D-image generators that also responds to touch and produces sound, says study coauthor Ryuji Hirayama, a materials science researcher at the University of Sussex.

Hirayama and his team were inspired by old-school televisions that moved a single beam of light quickly enough to generate a complete image for our eyes. In this new version, a bead, levitated by sound waves and illuminated by an LED light, replaces the TV’s beam of light. The bead moves and the colors change fast enough that users see only a multicolored image.

The bead itself is held aloft by ultrasound, Hirayama says. Though often used as shorthand for the medical imaging technique, ultrasound refers more generally to any high-frequency sound wave. Speakers on the top and bottom of the device generate ultrasound, and as a computer processing chip adjusts the sound waves, slight pressure changes propel the bead around. The pressure shifts move the bead at a rate of 29 feet per second to generate a single, completely visible image.

The machine can also generate sounds and haptic feedback for users. By slowing the sound waves, the ultrasound can be made audible. Users can feel the gentle atmospheric vibrations they generate as well. This means users can engage with the image to a limited extent. Reaching in a hand distorts the sound waves and changes how the bead responds. The images could potentially generate sonic responses to feedback, allowing us to “hear” them.

Right now, the system makes small, simple images because it can only lift one bead, Hirayama says. If the images were any larger, the bead couldn’t move fast enough to create a complete image.

Future research involves training the system to juggle several beads at once. Ideally, Hirayama would like the team to generate images that grow in real time — requiring several beads moving in increasingly larger circuits — or even make audio production more precise so that music or voices would appear to come from the 3D image, not the entire system.