A new study finds that several classes of bacteria can be coaxed into sprouting tiny, electrically conductive wires. 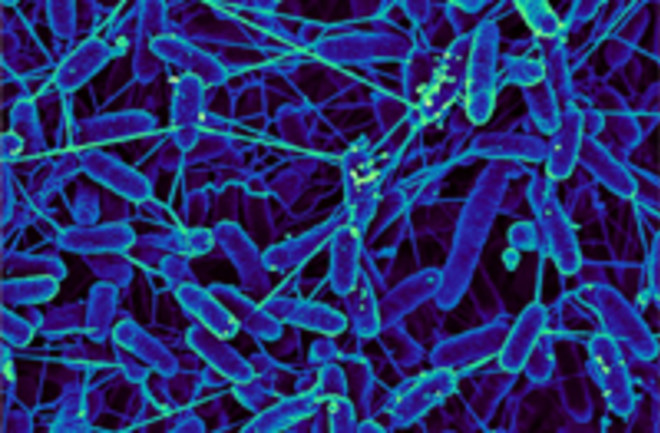 A study released last week reveals that many kinds of bacteria sometimes grow minuscule protein-and-iron wires that conduct electricity. The researchers say the wired microbes "will give us insights into all of microbiology that we can't even dream of yet," potentially allowing us to build more-efficient biological fuel cells and understand an important dynamic in the life of bacteria.

The microbes in question have a natural ability to pluck electrons off their food or other things in their environment and transfer those electrons to nearby metal ions or oxygen molecules. Nobody knows for sure why the microbes do this in nature, but their talents are intriguing to engineers because this electron parade generates a small electrical current—a tiny source of renewable energy.

Until recently, scientists thought the bacteria had to have direct contact with the metal ions or oxygen molecules in order to complete the electron transfer, says Yuri Gorby of Pacific Northwest National Laboratories. That changed recently when Gorby and colleagues were testing the metabolic needs of the bacteria Shewanella oneidensis and unexpectedly found the bacteria sprouting nanowires with lengths up to tens of microns—up to several hundred times the length of the bacterium's own one-celled body.

Gorby's team found the wires while growing Shewanella in low-oxygen environments. This lack of oxygen, a key electron acceptor in the transfer process, left the bacteria stuck with an excess of electrons. To get rid of them, the bugs had to reach out to other electron acceptors: metal ions. "We really didn't have any knowledge of these electrically conductive components, these nanowires, that bacteria produce," Gorby says. As published in the July 25 Proceedings of the National Academy of Sciences, these wire-sprouting talents were not limited to Shewanella; by manipulating their chemical environments, the researchers also got wires to grow from two very different types of bacteria.

Gorby touts the potential human use of these nanowires, although it will most likely be years before the payoff is seen on the human scale. Biological fuel cells—two electrodes that harness the electricity microbes produce—have been studied for decades as a potential source of alternative energy. Each fuel cell is less than one square centimeter and produces just one millionth of a watt of power, but fuel-cell researchers say that when used en masse, the cells could be particularly useful in wastewater treatment plants, where the bacteria could consume waste material from the water and produce electricity to power the plant. The cells now operate at only about 1 percent efficiency. By studying the workings of the newly discovered nanowires, Gorby says they might figure out how to make the bacteria grow additional nanowires, making the fuel cells more conductive and therefore more efficient. "We're not going to offset the use of fossil fuels," he says, but bacterial fuel cells could "contribute to an overall portfolio of alternative energy."

Beyond their direct applicability, the nanowires may help biologists better understand how bacteria live and evolve. Gorby hypothesizes that the wires are "a fundamental aspect" of energy and electron movement in microbial communities. And when energy is efficiently distributed in a ecosystem, he says, everybody wins: "One of the problems we have in the world is the inequity of energy and wealth. So I think this cooperation among different groups of bacteria leads to sustainability. And since they've been around about 3.5 billion years, I'd say it's a pretty effective strategy."