Will We Have Nuclear Fusion Reactors Within a Decade? 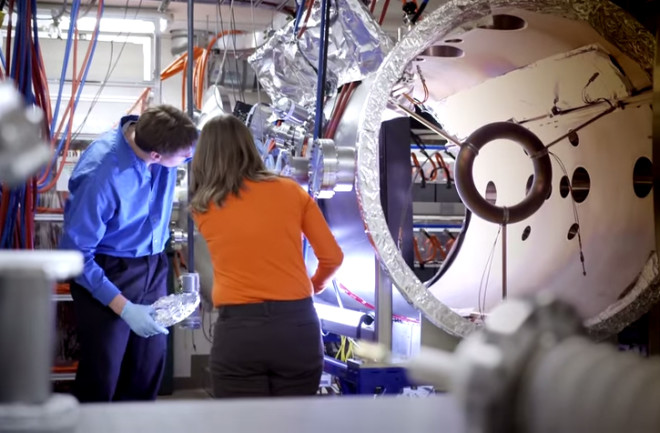 Lockheed Martin Corp. on Wednesday said its engineers had made a breakthrough in the race to build a nuclear fusion reactor.

The company’s secretive research unit, Skunk Works, claims that within a decade

it’ll develop and deploy a nuclear fusion reactor that’s powerful enough to light over 80,000 homes, yet small enough to fit in the back of a truck. If the company succeeds, it would mark a major milestone in mankind’s pursuit of a viable nuclear fusion power source.

In case you haven’t heard, nuclear fusion is kind of a big deal. Rather than splitting atoms apart, like our current nuclear fission reactors, fusion melds two atoms into one releasing an enormous amount of energy. Fusion reactions are emission-less, sparing the planet nuclear waste from fission reactors, and the heavy carbon emissions spewed by coal-powered plants. Best of all, the reactions are fueled by hydrogen isotopes that are practically in infinite supply in the planet's oceans. Earlier this year, scientists at Lawrence Livermore National Laboratory, a massive fusion research facility in California, announced they had produced a fusion reaction that yielded more energy

than went into it. That breakthrough occurred in a firing chamber the size of a small house.

Lockheed's scientists believe they can exponentially scale down the size of a reactor by with improved magnets. Fusion reactions occur within a firing chamber where two atoms are smashed together. The collision produces intense heat — fusion, after all, is what powers the sun — that needs to be controlled to keep the reactor from being destroyed. Powerful magnets keep superheated ions suspended in place within the chamber, which prevents them from destroying the reactor walls. Lockheed's reactor utilizes a higher fraction of the magnetic field pressure within the firing chamber, allowing for more control of the reaction while also reducing its size. Lockheed's engineers say the small size of their proposed reactor will let them build and test prototypes in a shorter timeframe, which makes them hopeful they'll find a successful design within the decade.

The truck-sized reactors could someday be installed in ships that could travel the seas indefinitely, or power airplanes for over a year of continuous flight on just a few bottles of fuel. In a promotional video (above), Lockheed engineer Tom McGuire said the pint-sized reactors could power cities and homes within 20 years.

A Bit of Skepticism

If you thinkLockheed’s nuclear fusion reactor sounds a little too good to be true, you have plenty of company. Since the announcement Wednesday, scientists have tempered Lockheed'shigh hopes with a dose of reality. For one, the reactor hasn’t been built yet. “Some key parts of the prototype are theoretical and not yet proven,” Nathan Gilliland, CEO of Canadian fusion company General Fusion, told Wired

Thursday. For others, the devil’s in the details, which were lacking in Wednesday’s announcement. It’s led other scientists to question the manner in which Lockheed is promoting its breakthrough. The Register

"I think it's very overplayed; they are being very cagey about divulging details," Professor Edward Morse from UC Berkeley's School of Nuclear Engineering in California told The Register.

Professor Steven Cowley, the director of the Culham Centre for Fusion Energy in England, also had his doubts. He told The Guardian

“I can’t see any results. I mean what have they achieved? It’s all promise,” says Cowley. “The proof is in the pudding in science. I’m surprised that a company like this would make this kind of announcement without announcing any results.”

Solving the fusion riddle has long been a pursuit of humanity, and history is replete with announcements that this elusive power source is just within our reach. However, those promises have yet to be fulfilled. So, are you buying the hype this time?