Will Airports Soon Have Walls That Can Sniff Out Terrorists? 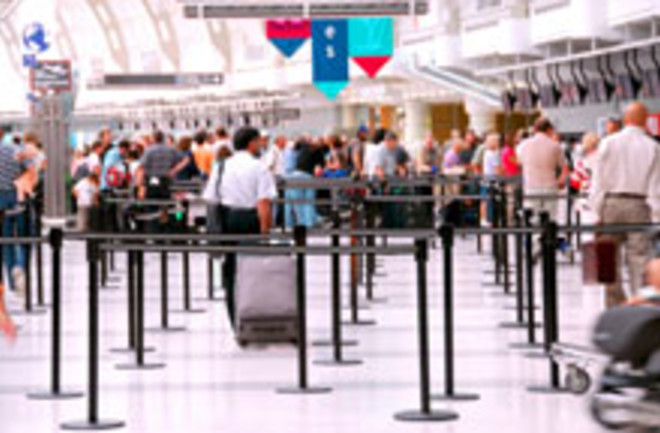 The walls are alive... with sophisticated sensors that can sniff out potential terrorists, according to Popular Science:

Researchers at brain trust Fraunhofer Institute for Communication, Information Processing andErgonomics (FKIE) in Wachtberg, Germany have developed a network of "chemical noses" that can not only smell chemicals hidden on a person, but also identify the carrier as he or she moves through a crowded space.

This means that someone entering an airport with individual chemical components, that can be used to make an explosive later, can be tracked right from the door itself. Sensitive sensors located in walls would "sniff" out the chemicals, triggering a discreet security alarm. The sequence of triggered alarms would allow security personnel to determine which direction the chemical-carrying person was moving, and a software program would zoom in on one individual in the crowd. Cameras all over the airport would track the suspect as he moves and security could then apprehend the person well before he/she reaches the crowded security checkpoints. Here's how the Hazardous Material Localization and Person Tracking (HAMLeT for short) system works, according to researcher Wolfgang Koch:

The system involves a network of highly sensitive smell sensors that follow an explosives trail. There are oscillating crystals on the sensor and whenever the electronic noses capture chemical molecules, their oscillation frequency changes. The precise nature of the change is different for different substances.

In an experiment with the German Armed Forces, the system accurately zeroed in on five "terrorists" carrying hidden explosives. The scientists are now working on refining the prototype, so there are no false alarms. However, there is no mention of the dilemma faced by particularly smelly people. What if your deodorant or aftershave contained some sort of chemical that could also be used to terrorize old ladies and kids on a plane? Our suggestion? Don't stand too close to the walls. Related Content: Discoblog: German Activists Protest Body Scanners By Stripping Down 80beats: 5 Reasons Body Scanners May Not Solve Our Terrorism Problem 80beats: Are Digital Strip Searches Coming Soon To Every Airport Near You? Discoblog: “What a Wonderful Smell You’ve Discovered!” Device Sniffs Out Dead Bodies 80beats: New Research Points Toward Artificial Nose Based on Human Smell Sensors DISCOVER: Future Tech discusses the military’s interest in e-noses Image: iStockphoto