Why Scarlett Johansson Is the Cyborg Hollywood Deserves 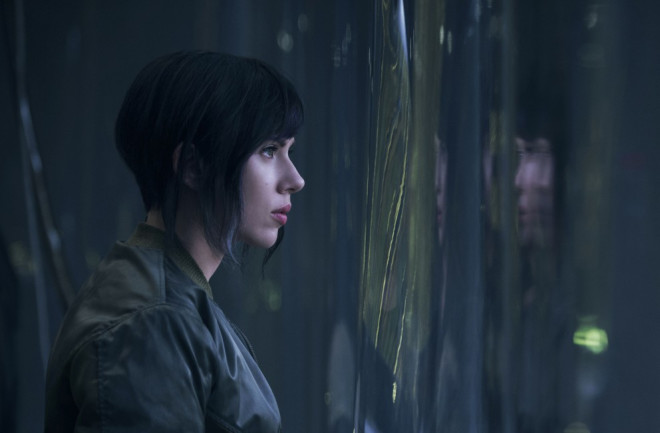 A first image of Scarlett Johansson in the role of a cyborg named Major Motoko Kusanagi from the upcoming live-action film adaptation of "Ghost in the Shell." Credit: Paramount | DreamWorks Pictures Hollywood directors such as Steven Spielberg and the Wachoswski siblings have drawn inspiration from the science fiction vision of the 1995 anime film "Ghost in the Shell." But a live-action Hollywood remake of "Ghost in the Shell" has proven controversial because of the choice to cast Scarlett Johansson in the role of the story's main cyborg character known as Major Motoko Kusanagi. Let us not waste time on the common complaints about Johansson's casting: Hollywood's history of "whitewashing" Asian roles by casting white actors and actresses as Asian characters; the uphill battle that Asian American actors and actresses still face in getting meaningful roles in Hollywood films; the lack of consideration for how the original "Ghost in the Shell" story relies upon its Japanese cultural setting. I believe it's far more fascinating and relevant to consider whether Johansson has the acting skills and experience to portray a complex action heroine who must wrestle with existential questions about her identity as both human and machine. In the original 1995 "Ghost in the Shell" film, Motoko Kusanagi is a human whose original body has almost been completely replaced by mechanical parts. She is effectively a human brain controlling a powerful robotic body designed for combat. Her mechanical body parts can be repaired or replaced as needed, but not without cost. During the film, Kusanagi wonders what remains of her humanity as her body has become mostly machine. Even as she hunts a dangerous and mysterious hacker, she contemplates her own sense of growing isolation from the human society she has sworn to protect. The role demands an actress who can convey a commanding physical presence and power alongside moments of human vulnerability and sensitivity. Allow me to present a modest proposal: Johansson's acting career makes her supremely qualified to play a powerful cyborg struggling with an existential crisis in future Japan. In addition, Hollywood has plenty of movie magic to take care of concerns about her non-Asian appearance. We can rebuild her. We have the technology. https://www.youtube.com/watch?v=0j6wsGuzP2Q

Cyborg in the Making

First, let's consider how Johansson's acting career has prepared her for the role of Kusanagi. There will be spoilers for some films, so read this section as your own risk.

Even Johansson's real life has unintentionally inspired echoes of "Ghost in the Shell" themes. A Hong Kong robot enthusiast has built a humanoid robot with an uncanny resemblance to Johansson, Reuters reports. The robot's unnatural movements and stilted voice may seem creepy now, but it represents an exciting forerunner to the robotic and cyborg bodies of the future.

Johansson's qualifications to make "Ghost in the Shell" a success go well beyond her acting capabilities. Johansson represents one of the few actresses whose mere association with a project can guarantee that Hollywood studios will give the film the green light for production, as Variety explains. Johansson's roles in both large and small films has undeniably provided a boost for their box office revenues. Her star power's value to Hollywood's bottom line on the "Ghost in the Shell" project cannot be outweighed by concerns about portrayals of Asian characters and lack of casting opportunities for Asian American actors and actresses. (It helps here to cover your ears and sing "la la la" whenever someone mentions the Pew Research Center statistics about Asian Americans representing the "highest-income, best-educated and fastest-growing racial group" in the United States. Done? OK.) Still, Hollywood studios get it. They understand that it can seem a little strange to cast an actress of Ashkenazi Jewish and Scandinavian descent in the role of a character who originated as Japanese. The good news is that filmmakers have several technological tricks to dampen the outrage of social justice warriors and ensure that Johansson's casting satisfies everyone.

https://www.youtube.com/watch?v=WzV6mXIOVl4 Fans of the original "Ghost in the Shell" should feel grateful to be alive at a time when Hollywood's remake could introduce the story's philosophical musings on humanity's future to a much wider audience. In fact, many Japanese fans had already expected the Hollywood remake to star a white actress, according to

Sam Yoshiba, a director at the Japanese publisher that owns the "Ghost in the Shell" rights, even praised the choice to cast Johansson in the iconic role. As a result, The Hollywood Reporter shrewdly observes that Japan's outrage has seemed muted in comparison with the sound and fury coming from some Asian Americans and Western social justice warriors. This especially highlights the absurdity of the whitewashing complaints coming from Asian Americans. If the Japanese creators and fans of "Ghost in the Shell" can behave so reasonably, why can't Asian Americans follow the example of their kinfolk living on the other side of the Pacific Ocean? I'm no cultural expert, but I'm pretty sure that the views of people belonging to Japan's 98-percent majority population basically mirror the cultural identities and concerns of the Asian-American minority in the United States. Deep within our genetic heritage, we never really lose that cultural connection and identification with our ancestral homelands -- or the homelands of people who kind of look like us. After all, U.S. pollsters like to solicit the opinions of Irish citizens to really understand what white America is thinking about. And it's why Americans whose ancestors came over on the Mayflower can still sing "God Save the Queen" and salute the Union Jack with tears in their eyes. Enough with the negativity. Rather than dwell on outdated concepts such as ethnicity and identity politics, I think it's far more productive to focus on universal issues such as how people will preserve their humanity amidst the rise of sophisticated robots, artificial intelligence and cyborg bodies. I believe that Hollywood can transform "Ghost in the Shell" into the post-racial science fiction classic that the U.S. moviegoing audience deserves. Perhaps a successful remake could even inspire that utopian future when we slip the shackles of modern PC thinking and transcend our mortal existence like an exuberant Dr. Strangelove rising from his wheelchair. See you on the other side, space cowboys and cowgirls. http://www.youtube.com/watch?v=so8NQficzZg&t=2m23s DISCLAIMER: In case you couldn't tell, I humbly submit this post as satire. Lovesick Cyborg will return to its usual programming next time. EDITOR'S NOTE: After getting some helpful reader feedback on what was and wasn't working, I'm going to be playing around with the wording of this post to make my satirical intent more clear. Yes, my original post had a disclaimer at the bottom. But if the rest of the piece can't stand alone as satire, that's on me as a writer. Thanks all.