Why Astronomers Will Hate the Internet of Things 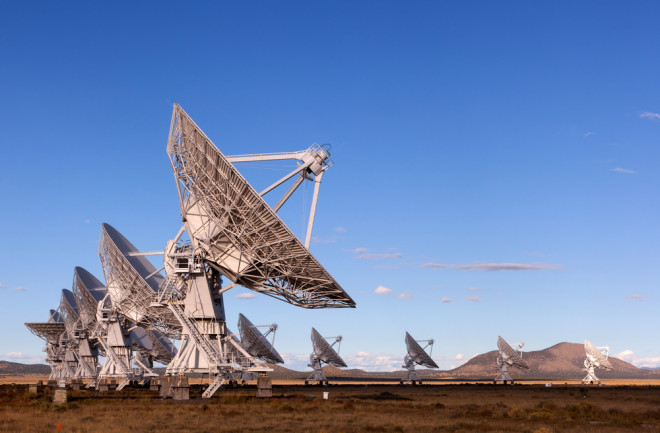 Radio telescopes at the Very Large Array, the National Radio Observatory in New Mexico (Credit: Manamana/Shutterstock) A minor fracas between astronomers and robo-lawnmowers has been making headlines, which sounds painfully futuristic. At issue, whether the maker of Roomba can let its autonomous mower operate on restricted radio frequencies that telescopes use to observe the cosmos. And the whole thing is futuristic in another, more subtle way, as well. Robot lawnmowers are just one of the many coming gadgets that will be incorporated into the Internet of Things, a wireless network in which even our everyday appliances will participate. And it’s that future that has astronomers on edge. A Web of Nouns The trouble began because iRobot doesn’t want its customers to have to do any physical labor — not cutting the grass and definitely not digging the trenches for the underground wires that most autonomous lawn mowers use to sense the edge of their domain. iRobot applied to the FCC to be allowed to use wireless broadcasters instead, at radio frequencies between 6240 and 6740 MHz. Problematically, though, space-based methanol also broadcasts radio waves at those frequencies. Methanol traces star formation and tells us about the evolution of our galaxy, which (taken to its extreme) tells us how we got here. To protect that band, the FCC says “all practicable steps shall be taken to protect the radio astronomy service from harmful interference.” And within that band, it prohibits “fixed outdoor infrastructure.” The National Radio Astronomy Observatory says iRobot’s guiding beacons violate that prohibition and insist the mower-bot stay 55 miles away from its telescopes. iRobot says nuh-uh, “there is little risk of interference,” and 12 miles is sufficient.

The Internet of Things may save us time and energy, but it's a headache fro astronomers. (Credit: Chesky/Shutterstock) If one brand’s wireless landscape-eater can cause such a stir, just imagine what could happen when our world is full of self-adjusting, internet-connected devices all communicating wirelessly with each other and with the Web. They will all need to use the radio “spectrum,” but how they’ll split it up — and share it with astronomers, other industries, and the government — when more devices need a slice of the pie remains to be seen. Smart thermostats can already make your house the temperature you want while monitoring the outdoor weather. Bluetooth beacons help you find your keys. Sensors monitor inventory and alert vending machine owners that Fruitopia is sold out. This is the Internet of Things, and it’s coming. “There are no spectrum bottlenecks for dedicated Internet of Things systems yet,” Kevin Ashton, co-founder and former executive director of Massachusetts Institute of Technology's Auto-ID Center, told Bloomberg BNA, “but we are seeing Wi-Fi services get maxed out, as there are only so many channels you can cram into the available spectrum.” Splitting up the Spectrum The Internet of Things requires wireless devices. A Nest would look stupid with an Ethernet cable snaking out of its circumference. If your wearable glucose monitor had to be plugged into a router to work, you’d never get far from home. Each device operates at a specific radio frequency. In the US, the FCC controls who gets to use which frequencies. In some bands, anyone can transmit radio waves, as long as they stay below a certain power (most Internet of Things things operate here). Other bands require a license, which the government sells to organizations at (surely riveting) auctions. And, finally, some bands are reserved for radio astronomy. Check out this graphic to see how it’s parceled out:

(Credit: U.S. Department of Commerce) The radio astronomy bands, however, only cover a tiny portion of the spectrum, while radio astronomers are interested in almost all of it. So while the Internet of Things may color within the lines of its own little boxes (which seems dubious if iRobot is a harbinger), objects in space have no such compunctions. They will continue to send out radio waves that have the same frequency as your video-chat dog-treat dispenser. And the signal from your dog’s sockeye-salmon biscuit video could completely swamp a signal that’s been traveling valiantly across space for billions of years. But as the spectrum gets more crowded, we’re more likely to see changes and challenges to its allocation — just like with iRobot — that bleed toward protected bands. Radio Waves … from Space Astronomers use radio telescopes like those in Green Bank, WV; Socorro, NM; Jodrell Bank, England; Arecibo, Puerto Rico; and Parkes, Australia to detect the radio waves coming from space. Although cosmic radio waves come from powerful sources like black holes, pulsars, and natural lasers, they have traveled a long way before hitting earthly antennas. Radio waves, like visible light, appear dimmer the farther you are from the source. If you are 1 light-year from a pulsar, and then you step back to 2 light-years, the radio waves will become four times dimmer. Step back 4 light-years, and the waves are 16 times dimmer. By the time radio waves get here, they’re way less than shadows of their former selves. A single cell phone placed on the Moon, for instance, would show up more powerfully in radio waves than almost anything else in the sky. So when you put a cell phone right next to a telescope, or even miles away, it easily drowns out the pipsqueaks coming from space. Imagine trying to see a flashlight that someone was holding in front of the Sun (hint: rhetorical). Quiet Zones To protect their ability to do radio astronomy without the intrusion of your smartphone, astronomers put their telescopes in remote locations, preferably valleys surrounded by mountains that absorb radio waves trying to trespass from outside. But in a world full of radio-emitting devices, being away from population centers isn’t good enough. Any population is a problem — and not just because of the obvious suspects, like cell phones. Nearly any electronic device emits radio waves (proof? Turn on a portable radio, tune to an empty AM station, and hold it up to your refrigerator/fluorescent light/digital camera/oscillating fan).

The Green Bank telescope rests in a valley of the Allegheny mountains to shield the observations from radio interference. ( NRAO/AUI) Some observatories politely ask people to turn off their cell phones, as if this were the beginning of a movie and not the fate of our understanding of the universe. But others, like Green Bank, have established “radio-quiet zones,” where lots of normal things are against the law. For 13,000 square miles around the observatory — a region that includes parts of Virginia and Maryland as well as West Virginia — broadcasters have to fill out special paperwork to make sure the telescope can’t “see” their transmitters. If it can? Permit denied. So for an hour or so radius around Green Bank, you can’t get cell phone service, no matter how high you hold your iPhone in the air. “Keeping cell service out of the immediate vicinity hinders the utility of lots of gadgets which would potentially transmit on multiple bands, not just their link to the cellular service,” says Green Bank’s Carla Beaudet, the observatory’s radio-frequency interference engineer. “The National Radio Quiet Zone offers protection to Green Bank both directly and indirectly.” In a smaller, 10-mile radius around the observatory, the rules are stricter: no Wi-Fi, no microwaves, no cordless phones, no wireless game controllers, no Bluetooth transfers. It’s an enforceable law, and NRAO has a truck that can track down rogue radio waves. Employees have knocked on doors to find shorted electric blankets, malfunctioning electric fences, contraband Wi-Fi routers, and once (at least according to legend) was plagued by the radio tracking collars on fast-moving squirrels. Green Bank has the most well-known and oldest quiet zone, which was established in 1958 (not in small part because the government’s communications station Sugar Grove is just down the valley). But Australia, South Africa, and Chile — home to the next generation of radio telescopes — have or soon will have their own versions. “Geospatial exclusion areas like the National Radio Quiet Zone can go a long distance (pun intended) towards protecting specific radio astronomy facilities,” says Beaudet, “particularly if there is additional protection from terrain obstacles” (such as mountains). Deafening Devices But many telescopes — such as Arecibo — have only terrain obstacles, and no official protection. Soon, they may only be sensitive enough within the officially protected radio astronomy bands — and that’s only if corporations play by existing rules. “The extent to which the Internet of Things will be a threat to radio astronomy will depend upon whether the regulatory standards can be upheld in the face of the massive onslaught of lawyers funded by the private sector,” says Beaudet. “If the regulatory standards are upheld rather than modified every time somebody needs more spectrum, there will still be small windows of spectrum in which astronomers can observe.” In the future, telescopes outside quiet zones may detect so much blah-blah-blah from our devices that they won’t catch the whispered conversation from space. But the people who live in those quiet zones won’t be able to fully inhabit the modern world. Their dogs will have to eat treats all alone. Their home heating systems will be woefully inefficient. They’ll never buy an app. (Note: Some want it that way and move to places like Green Bank because it’s electromagnetically old-school. ) If we live in a hyperconnected wireless world, which we already do, we learn less about the universe than we would if radio telescopes were the only technology in operation (at least until we can build a radio telescope on the Moon). But we’re not going to stop making smart devices and linking them together, nor should we. We will have to find a way to manage and balance those interests. Not every iRobot will get what it wants. Not every pulsar will be discovered. Conversations like the one between the National Radio Astronomy Observatory and iRobot are just beginning. Go get yourself some popcorn. You won’t believe what happens next.