Why Amazon Dreams of Flying Warehouses 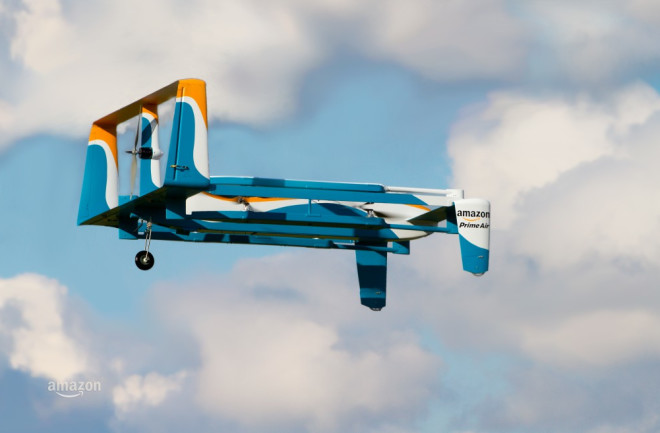 A delivery drone prototype operated by Amazon Prime Air. Credit: Amazon Amazon gets to play full-time Santa Claus by delivering almost any imaginable item to customers around the world. But the tech giant does not have a magical sleigh pulled by flying reindeer to carry out its delivery orders. Instead, a recent Amazon patent has revealed the breathtaking idea of using giant airships as flying warehouses that could deploy swarms of delivery drones to customers below. Many patent filings related to new technology often indulge in fantastical flights of fancy. But it's worth taking a moment to appreciate some of the truly wilder scenarios being imagined within this Amazon patent filing. One scene envisions human or robot workers going to work busily sorting packages aboard airships hovering 45,000 feet above major cities. Another scene imagines the airship's kitchen whipping up hot or cold food orders that would be loaded onto delivery drones for delivery within minutes. A third scene anticipates swarms of delivery drones dropping off orders of food or t-shirts to people attending concerts or sports games. Amazon's patent filing even considers how the airships could fly at much lower altitudes to act as giant billboards or megaphones that advertise and sell items directly to the crowds below. There is a method to the madness. Amazon currently aims to attract customers with the promise of getting almost anything—clothing, electronics and groceries—delivered within days or even hours. It is currently racing against Google and delivery drone startups such as Flirtey to become the go-to service for customers who expect speedy deliveries of their purchases. The Amazon patent idea for an "airborne fulfillment center" may never become reality, but it speaks to the company's ambition to enable an "instant gratification" world for customers. At its heart, Amazon's idea for flying warehouses aims to solve two problems. First, a mobile warehouse flying high above cities would theoretically enable Amazon to move its packages and products even closer to customers' homes and businesses and shorten the time needed for last-mile deliveries. The company could even strategically move certain flying warehouses to different locations depending on temporary demand (such as crowds gathering at stadiums for sporting events or concerts). Second, the flying warehouse scheme tries to tackle the range problem for delivery drones. The small delivery drones being tested by Amazon have fairly limited range of approximately 10 miles (or 20 miles roundtrip). That poses a challenge for Amazon's Prime Air service, which recently began its first deliveries near Cambridge, UK with the promise of delivering packages within 30 minutes. https://www.youtube.com/watch?v=vNySOrI2Ny8 By acting as flying motherships, the lighter-than-air airships could could better enable delivery drones to fulfill that half-hour promise. Normally, delivery drones must use their own battery power starting from the time they take off with a package until they reach the delivery location and then return home. That battery power necessarily limits their delivery range. By comparison, Amazon's patent filing envisions the delivery drones simply gliding down from their motherships and relying mostly on gravity instead of their own power. The power savings combined with the extended range provided by the mobile airships could theoretically go a long way toward speedier deliveries. The patent states:

This speed of delivery provides near instant gratification to users for item purchases and greatly increases the breadth of items that can be delivered. For example, perishable items or even prepared meals can be delivered in a timely fashion to a user.

The small delivery drones would not have to struggle under their own power to return to their motherships hovering at eye-watering heights of 45,000 feet. Instead, Amazon's patent filing suggests that smaller airships could act as "shuttles" to carry the delivery drones back up to the mothership. Such shuttle airships could also resupply the flying warehouses with new inventory, supplies, fuel and human or robot workers. Amazon's patent filing spends much of its time talking about using the airships as flying advertising. Using lighter-than-air aircraft such as blimps for advertising is certainly nothing new. But Amazon's idea takes this all one step farther because the airship advertising would be dangling the possibility of getting that popular new shoe or hot food delivery within minutes of seeing it being advertised. The patent filing even imagines the airship's advertising display updating the quantity count of certain items as they sell out. There is a very long way to go before Amazon's flying warehouses could ever become remotely feasible. For one thing, the U.S. Federal Aviation Administration (FAA) has yet to figure out a scheme that would allow swarms of delivery drones to operate safely in the skies above densely populated cities. The FAA currently bans any drone from flying within a certain range of the crowded sporting events or concerts. And even if the airships would theoretically fly above the normal operating altitudes of commercial airline flights, it's less clear how that airspace would be kept safe if dozens of delivery drones were dropping down from the motherships toward the ground at any given moment. This is only one of several wild Amazon patents related to drones to have surfaced recently. But if you one day see Amazon's airships flying low overhead and advertising a trip aboard a SpaceX rocket to the Mars colonies, you might want to pinch yourself and check that you're not having a dream based on a recent viewing of the 1982 science fiction film "Blade Runner." http://www.youtube.com/watch?v=nx02tM0os7k&t=2m48s