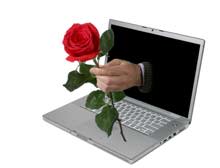 "May your day be full of jasmine." "My lady, how I want to climb this wall of silence." "I LLLLLove you." No, this isn't the tortured verse of botanically inclined lovesick teens. It's the coded poetry of revolution. As uprisings spread across northern Africa this month, protesters lit up social networking sites with updates—even Egypt's attempt to shut off the Internet couldn't stop them completely. But in Libya, where the fight is getting hotter and hotter, few people use sites like Facebook or Twitter, and many would be afraid to write there openly. So protest leader Omar Shibliy Mahmoudi found a place where they could speak in code: dating sites.

Mahmoudi - leader of the Ekhtalef, or "Difference," movement - acted as if he was looking for a wife under the profile name "Where is Miriam?" and sent coded love letters to spur people to revolution. Since men cannot talk to other men on the site, revolutionaries posed as women to make contact with Mahmoudi, taking on names such as "Sweet Butterfly," "Opener of the Mountain," "Girl of the Desert" and "Melody of Torture." [Herald Sun]

Once Mahmoudi connected with his sham love interests on the website (called Mawada), they bantered in cryptic poetry to suss out the other's feelings. The "jasmine" reference above is a nod of support to the ongoing Jasmine Revolution. The five L's in ""I LLLLLove you" means that a person has five supporters with them.

If a supporter wrote, ""My lady, how I want to climb this wall of silence. I want to tell the story of a million hurts. ... But I am lost in a labyrinth. … Maybe we can meet on Yahoo messenger," it told the writer to migrate the chat to Yahoo Messenger so as not to raise the suspicion of the monitors, Mahmoudi said. [ABC News]

that social networking hasn't caught fire in Libya; most of the updates on those sites are coming from Libyan expatriates. However, Mahmoudi's attempt to disguise revolution in the language of love proved a smashing success.

When Mahmoudi created his pretend profile on Mawada, he figured 50,000 supporters would be enough to take to the streets. But using various aliases on the dating site, he said he ended up with 171, 323 "admirers" by the time Libya's Internet crashed last Saturday. [ABC News]

Since Mahmoudi told ABC News of his doings, we assume he got what he needed out of his phony romances before spilling the beans. Related Content: 80beats: Hacktivists Join Protests, Attack Egypt and Yemen Government Websites

80beats: Welcome Back, Egypt: The Country’s Internet is Back Online

80beats: After Looting in the Egyptian Museum, Archaeologists Pick up the Pieces