While LHC Scientists Were Drinking Champagne, Hackers Were Attacking 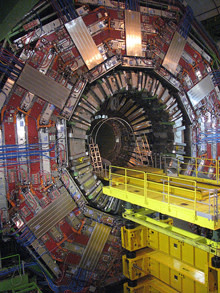 The computer maestros tinkering with Yahoo's code at their all-night hackathon weren't the only hackers that have been busy lately. Late last week, a group hacked into one of the Large Hadron Collider's main computer systems. Calling themselves part of the "Greek Security Team," the hackers said they wanted to expose the weaknesses in the particle smasher's computer systems. The attack against the Compact Muon Solenoid Experiment, one of the LHC's four main experiments, did little direct harm, save some embarrassment for the LHC scientists, but they did bring down the CERN Web site. However, The Telegraph reported that the hackers were only "one step away" from the detector control systems, from where they could have turned off parts of the machine and ruined experiments. The Greek hackers seemed more interested in warning the LHC operators of their weakness than destroying data, telling the scientists that they were "pulling your pants down" now so the LHC operators would better their security. The Greek Security Team seems like a slightly more malevolent version of the MIT students who outlined all the weaknesses of the MBTA transit system in Boston so the company would clean up their act. Hopefully the LHC operates sit up and take note, since the world's largest science experiment is at stake.

The SciencesWhat Is A Blazar? It's Like Staring Down The Barrel Of A Black Hole
Recommendations From Our Store