Where the Ladies At? There's an App for That 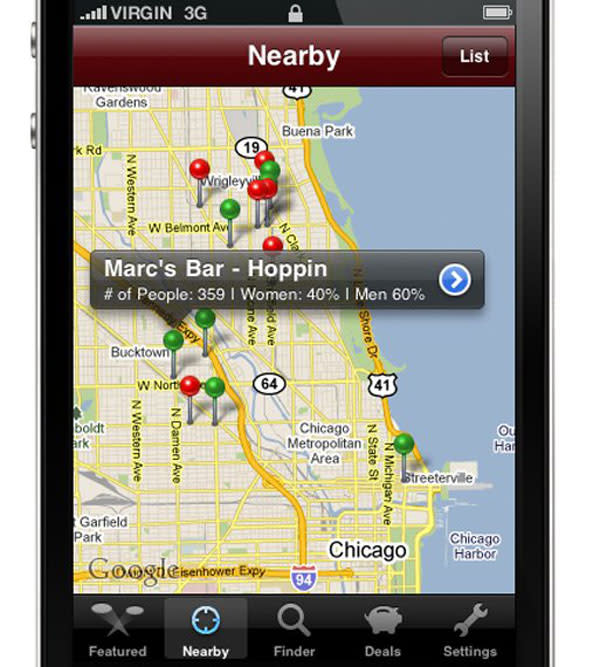 Here's a good use for augmented reality

: directing clubgoers to the bars that have the best odds for meeting persons of their preferred gender. And how do you figure that out? Well, a start-up company called SceneTap

is doing it with facial recognition. Mounted at the doors of clubs, cameras will survey the crowd and, using facial recognition software, report the ratio of men to women to a free smartphone app. Forbes reports

that 200 clubs, more than fifty of them in SceneTap's home base of Chicago, have signed up to be included in the service, which will debut next month. The software is not sensitive enough to recognize individuals, stresses CEO Cole Harper---just sensitive enough to see whether that face coming in the door is male or female. The company plans to generate revenue from Groupon-like deals and advertising. Now, when you get down to the privacy issues, it still seems a little problematic---a little Google Streetview Car

---to us. Does the software store those images someplace? Could someone's whereabouts be ascertained by a human looking at those files? But maybe we're just paranoid. (If the kind of ladies you look for are on Foursquare, there's another, non-camera-involving app that can help with that. Wheretheladies.at

that points you towards the bars with the largest number of checkins by females.) It does seem like SceneTap, if widely adopted, would get rid of a lot of the frustration inherent in trying to find a place where you can meet potential partners, from wasted cab fare to long, fruitless waits on the sidewalk. If you can find the nearest pizza place with your phone, why not the nearest cluster of ladies? http://www.youtube.com/watch?v=3lO5eGEnyRA (via PopSci