When US Navy Suicide Drones Went to War 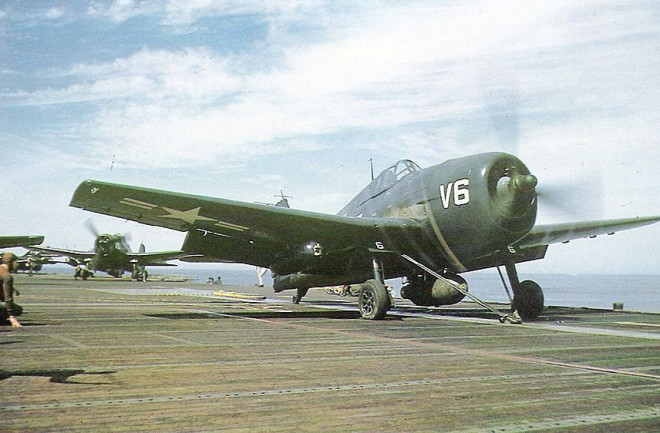 An F6F Hellcat fighter converted into a suicide drone sits onboard the aircraft carrier USS Boxer during the Korean War. Credit: By USN [Public domain], via Wikimedia CommonsDuring the Korean War, a life-or-death race took place between a U.S. Navy Hellcat fighter aircraft and a group of North Koreans on a railroad handcar. Apparently believing that the fighter was preparing to attack with its machine guns, the North Koreans frantically pumped the railroad handcar's arm as they headed for the safety of a railroad tunnel. They made it inside just before the aircraft crashed into the hillside near the tunnel entrance. The strange incident marked one of the U.S. Navy's early experiments with suicide drones in 1952. These early drones tended to be older, obsolete aircraft outfitted with TV transmitters that allowed human pilots to see the drones' cockpit perspective on a TV screen. That enabled the pilots to remotely control the drone aircraft from the relative safety of a nearby "mothership" or "mother plane" by using radio control. Each of the Hellcat drones was loaded up with a 2,000-pound bomb before becoming the first military drones launched from an aircraft carrier to enter combat. “When the drone hits the target the screen in the mother plane just goes blank,” said a Navy officer in a UPI interview. “It’s a nice way to fight a war.” Despite such optimistic statements, the Hellcat drones did not have a significant impact on the Korean War. Just one of six Hellcat drones succeeded in striking a bridge that had been designated as its target, according to Cory Graff's book "F6F Hellcat at War." The other Navy suicide drones failed because of malfunctions or missed their intended targets involving a railroad bridge, power plant and the train tunnel. In fact, the Navy described the handful of experiments with the Hellcat drones as an "interim measure" because the U.S. military was already developing guided missiles that could fly farther and hit targets more effectively. "It wouldn't take much imagination to realize there are better ways of doing this job," said Rear Admiral John H. Sides, director of the Guided Missiles Division of the Office of the Deputy Chief of Naval Operations, in a New York Times article. As military weapons, the crude suicide drones had much more in common with guided missiles than modern military or civilian drones that try to avoid crashing into anything on purpose. But such Navy suicide drones still represent a crucial, if somewhat overlooked, chapter in the history of the U.S. military's early experiments with unmanned flying vehicles.

Suicide drone experiments began with the U.S. military's "aerial torpedo" tests during World War I that converted torpedoes into small biplanes with preset target destinations. The U.S. Navy was first to develop this concept with the Curtiss-Sperry Aerial Torpedo that first took flight in December 1917, according to Steven Zaloga's book "Unmanned Aerial Vehicles: Robotic Air Warfare 1917-2007." The Army Air Force sponsored a competitor in the form of the Liberty Eagle Aerial Torpedo that was also nicknamed the Kettering Bug after its inventor Charles Kettering. The Army Air Force made 50 of the Kettering Bugs before the war's end, but none of the Kettering Bugs ever saw combat. The project was discontinued in the 1920s due to lack of funding. https://www.youtube.com/watch?v=Nd8lLykmbJk U.S. military interest in suicide drones picked up once again during World War II. The U.S. Army Air Force threw its resources behind Operation Aphrodite: An effort to convert worn-out B-17 Flying Fortress bombers into suicide drones packed with 20,000 pounds of explosives. These "Weary Willies" relied on the combination of TV and radio technologies to allow mother planes to guide them to their targets. But these clumsy guided missiles came with a big catch. Volunteer crew members consisting of a jump pilot and autopilot engineer had to control the drone during takeoff and fly it to an altitude of 1,800 feet before setting the controls, arming the explosives and bailing out over England. These Army Air Force suicide drone missions in 1944 and 1945 occasionally cost the lives of their temporary crew members without hitting any of their targets, according to Donald L. Miller's book "Masters of the Air: America's Bomber Boys Who Fought the Air War Against Nazi Germany." The U.S. Navy had backed its own Project Anvil that converted PB4Y aircraft—modified B-24 Liberator bombers—into similar suicide drones. One of the few Navy suicide drones to join the U.S. Army Air Force's efforts in Europe was piloted by 29-year-old Joseph Kennedy Jr., brother to future U.S. president John F. Kennedy. The elder Kennedy and his copilot were both killed on August 12, 1944 when their plane exploded prematurely in the air before they had bailed out.

Finding Success in the Pacific

The U.S. Navy found much better success with suicide drones in the Pacific theater of World War II against the forces of Imperial Japan. A separate effort from Project Anvil, called Project Option, launched in 1942 with the grand vision of being a "billion-dollar program involving 5,000 drones, 18 operational squadrons, and the dedicated labor of some 10,000 civilian and military personnel," according to the Space and Naval Warfare Systems Center in San Diego. But losses of ships and aircraft during the early Pacific battles of Coral Sea and Midway forced the Navy to scale back its ambitions to just 500 drones. Project Option centered upon specially-built TDR-1 drone aircraft that could each carry a 2,000-pound bomb load. The TV and radio technology used in the drones evolved from the Navy's Radio-Controlled Aircraft Project that began in 1936 before the start of World War II. During early testing, a separate but related drone prototype called TDN-1 became the first radio-controlled aircraft to take off freely from the deck of an aircraft carrier called the U.S.S. Sable (one of two paddle-wheel carriers that operated as training vessels on Lake Michigan). https://www.youtube.com/watch?v=-MzxIkr5JO0 By 1943, the Special Task Air Group One (STAG-One) had deployed with 50 of the TDR-1 drones to the Russell Islands in the Southwest Pacific in preparation for combat. They practiced launching from airfields at Stirling and Green Island under the initial control of a ground crew. Once airborne, control of each drone was handed off to a modified TBM-1C Avenger torpedo bomber that acted as the airborne mothership to guide the drone to its target. Project Option made history with the first attack drones to successfully strike enemy targets starting in September 1944. The first of the Navy suicide drones to go into combat took out an antiaircraft gun battery aboard a beached Japanese merchant ship. During the next two months, 50 drones recorded 31 hits on other antiaircraft sites, bridges, airfields and ships that had run aground. But the impressive success of Project Option's strikes came at a time when the U.S. Navy had already achieved near-dominance of the seas and skies in the Pacific. As a result, the Navy suicide drones were recalled in late 1944. The seemingly surgical precision of the robotic planes stood out in stark contrast with the U.S. Army Air Force's indiscriminate firebombing campaigns against mainland Japan's cities in 1945 and the widespread destruction caused by the first atomic bombs in Hiroshima and Nagasaki.

The Future of Navy Drones

The end of World War II relegated U.S. military drones to roles as targets or sometimes reconnaissance aircraft. U.S. participation in the Korean War led to the brief resurgence of interest in suicide drones as embodied by the Hellcat drone tests in the early 1950s. But the development of guided missile technologies rendered the idea of ship-launched military suicide drones obsolete. Still, the idea of suicide drones has undergone a modern makeover for land battlefields. A new class of weapons called "loitering munitions" once again blurs the line between drones and guided missiles by having the capability to circle in the sky until they spot an appropriate target. They carry sophisticated sensors that enable them to dive directly onto targets with precision. And they're portable enough for individual soldiers to carry and deploy. By comparison, the U.S. Navy does not currently seem keen on developing drones for combat roles. Since 2012, the testing of the X-47B drone aboard Navy aircraft carriers initially led to speculation about the Navy's future Top Guns possibly consisting of robotic fighter aircraft. But the Navy has instead bet its chips on developing an unmanned tanker aircraft called the MQ-25 Stingray that could perform aerial refueling to extend the range of its carriers' manned aircraft. If the Navy does ever become more ambitious with the idea of carrier-based drones, it only need look back at its history for inspiration.