That's right, e-skin. A group of scientists at UC-Berkeley devised a flexible mesh using nanowires to create a substance that reacts to pressure, and, as their paper in Nature Materials said, "effectively functions as an artificial electronic skin." In the same issue, a team from Stanford University announced it had devised a kind of skin so sensitive, it can detect the weight of a bluebottle fly. All of which means for one shining issue, a scientific journal was a skin mag. Anyway, Stanford offered a fine video of its invention: Devised by a team lead by Zhenan Bao, puts highly specialized rubber between two electrodes. The rubber holds the electric charge until something alights on it (or has its dessicated corpse plunked on it). The rubber distorts, changing the amount of charge its holding, which is picked up by the electrodes and transmitted as a signal. Javey's e-skin also measures extremely small changes in pressure: from 0 to 15 kilopascals (equivalent to 2.17 psi), about the level of force needed to type on a keyboard or hold an object. 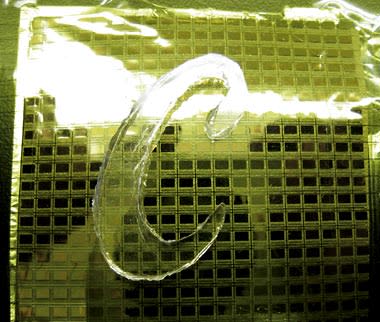 Javey's team impressed a "C" for Cal on their e-skin

Instead of specialized rubber, the e-skin uses a fine mesh of nanowires made from germanium and silicon, layered under special rubber. The nanowires hold the charge the rubber did in the Stanford experiment. The skin holds potential (get it?) for providing sensitivity for artificial limbs for people and robots alike. I hate to use press release

quotes but Javey explained it well: "Humans generally know how to hold a fragile egg without breaking it. If we ever wanted a robot that could unload the dishes, for instance, we’d want to make sure it doesn’t break the wine glasses in the process. But we’d also want the robot to be able to grip a stock pot without dropping it." Of course work on e-skin has been ongoing for decades: a University of Tokyo team devised an electrically sensitive rubber

that reacted to being stretched back in 2008, and the British firm Paratech released a skin-like material using carbon particles, called QTC

, in 1996. As for calling all this stuff e-skin, well, what are you going to do, that's what the researchers chose. At least it's not iskin. (Video courtesy Standford University, photo courtesy U.C.- Berkeley)