When Robot Personalities Mimic the Dead 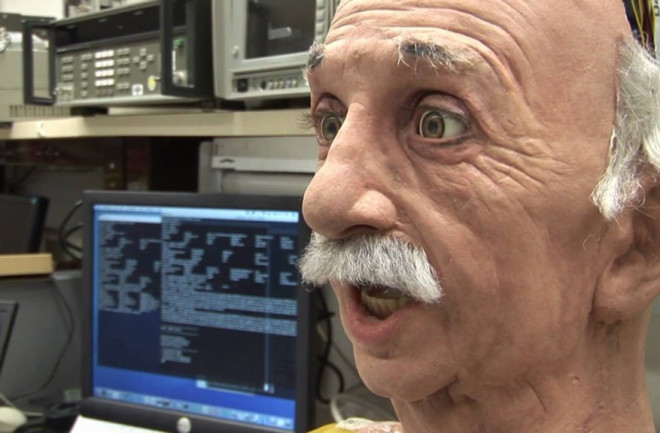 Albert Hubo is a battery-powered, untethered walking robot based on the Hubo robot developed by the Korea Advanced Institute of Science and Technology. The robot's face, built by Hanson Robotics, is modeled on famed physicist Albert Einstein. Credit: Hanson Robotics Hollywood actress Audrey Hepburn and martial arts legend Bruce Lee represent just a few of the dead celebrities whom have been resurrected as digital avatars in TV commercials to sell products such as chocolate or whiskey. A Google patent raises a new possibility by describing robot personalities based upon the voices and behaviors of dead celebrities or loved ones. Such a vision may not necessarily come true, but it raises the question of whether people would feel comfortable dealing with a robot that actively mimics deceased people. The patent awarded to Google on March 31, 2015, focuses on the idea of creating robot personalities that could be downloaded as software and transferred between different robots through an online service. It also describes the idea of creating customizable robot personalities tailored to the preferences of human users. That lays the groundwork for a future where robotic hardware could update and switch their software personalities based on the specific human customers they're serving. The patent also covers the idea of a base personality that act out different moods such as happiness, fear, surprise, and thoughtfulness. Google's patent even uses well-known celebrities — such as a perplexed "Woody Allen robot" or a derisive "Rodney Dangerfield robot" — to describe a range of possible robot moods. "The personality could be multifarious, in the sense of multiple personalities, which may be selected by the robot according to cues or circumstances, or a personality could be selected by a user (a human)," according to the Google patent. "The robot may be programmed to take on the personality of real-world people (e.g., behave based on the user, a deceased loved one, a celebrity and so on) so as to take on character traits of people to be emulated by a robot." To be fair, companies frequently patent ideas that never become commercial products for one reason or another. On the other hand, Google has gone on a notable robot buying spree by snapping up at least eight robotics companies in six months just last year. The technology giant clearly sees a big future in robotics one way or the other. And as the patent suggests, the company has put some thought into how future robots might socially interact with humans on a more regular basis.

Bring Out Your Dead

Customizable robot personalities represent a logical extension of smartphone assistants such as Apple's Siri. But the "deceased love one" and "celebrity" personality examples described by the Google patent almost certainly won't meet with universal joy and acceptance if they ever become a reality. We only need to look at past commercials that resurrected deceased celebrities as computer-generated avatars to get some idea about the people's possible reactions, said Karl MacDorman, a robotics researcher at Indiana University. MacDorman has spent much of his research career studying the "uncanny valley," an idea that describes how certain human-like figures in animated films or robotics can come off as appearing eerie or creepy. The idea of using dead celebrities in commercials was alive and well even before the arrival of modern computer-generated imagery (CGI) techniques; older commercials simply combined old footage of the celebrities with new footage through computer compositing techniques. Remember John Wayne in all those Coors Lightcommercials? How about Fred Astaire dancing with a Dirt Devil vacuum cleaner? Or Audrey Hepburn being repurposed for selling Gap jeans? More recently, the advancement of CGI technology has allowed advertising executives to direct the digital avatars of deceased celebrities in ways that they never acted before while still living. That has given rise to controversial cases such as a digital avatar of Orville Redenbacher cracking awkward jokes about mp3 players in a 2007 popcorn commercial. YouTube comments ranged from some people being impressed to others describing the digital avatar's look as "creepy" or like a "zombie." https://www.youtube.com/watch?v=Fcn4p213Zg8 MacDorman personally thought that the digital recreation of Redenbacher lacked authenticity, in part because the voice in the commercial failed to capture the real-life Redenbacher's distinctive Indiana accent. But the robotics researcher also conducted an informal poll of about 20 people to gauge their reactions to the Orville Redenbacher commercial. "Some people thought it was Orville Redenbacher, and it didn’t bother them at all," MacDorman said. "Others could tell it was computer generated. Others thought the idea of resurrecting Orville Redenbacher was really sick. There was quite a diversity of opinion." In 2013, martial artist Bruce Lee was digitally resurrected for a Johnnie Walker whiskey ad. That commercial drew less controversy about the appearance of the digital avatar — perhaps because of the better CGI — but still drew disapproving comments about the use of Lee's likeness to sell whiskey. Some people suggested that the whiskey commercial was disrespectful because Lee was a "health nut" who was never big on alcohol, according to Time. https://www.youtube.com/watch?v=SPyoiOTdHio Last year, actress Audrey Hepburn was given the digital avatar treatment in a Galaxy (Dove) chocolate commercial. That commercial was generally successful in winning over audiences, judging by the YouTube comments. Rather than having Hepburn hawk the product directly to customers, the commercial featured the digital Hepburn in a romantic scene vaguely reminiscent of some of her more famous Hollywood roles. It even plucked at heart strings with the inclusion of the famous song "Moon River" sung by Hepburn in the 1961 film "Breakfast at Tiffany's." Altogether, the commercial wisely allowed Hepburn to stay in character, MacDorman said. https://www.youtube.com/watch?v=lc9t1jNmtWc Maybe some future robot owners might find it amusing or even comforting to have their robot speak and behave like their favorite celebrity, dead or alive. Whether or not such a future might happen depends in large part upon how celebrities and their descendants — or whatever entity owns the right to their likeness — choose to participate in such projects. For example, fans of deceased comedian Robin Williams might be either relieved or disappointed to find out that he chose to restrict exploitation of his likeness for at least 25 years after his death, according to the Hollywood Reporter.

We Have the Technology

But individuals could still choose whether or not they would want robot personalities based on a "deceased loved one." The technology may already exist for enabling a robot personality that can partially simulate a real-life person's personality. A real-life person's interactions with other people could provide behavioral data for developing a robot personality based on the person, MacDorman said. Ideally, the real-life person might even directly control the robot's behavioral actions for a while so that the robot could build up a database of behavior. Existing software can already create a synthesized version of someone's voice based on vocal samples. The Google patent describes an example of how a personality program could vacuum up information from a person's smartphone or laptop to create a new personality based on a living or dead person:

Adoption of a personality, or some personification attributes, could be more direct, such as a simple user command to adopt a character by name: "Be mom"; "Become Gwynneth"; "Adopt persona Beta." The character (personality) may be a program already stored, or it could be something in the cloud. If the later, the robot would interact with the cloud to pull sufficient information regarding the "new" persona to thereby recreate a simulacrum for the robot. The information for the persona could also come from a user device. Such as, in response to a "Be mom" command, "mom" may not be known to the robot. The robot processor can then search user devices for information about "mom"... For example, the robot may be able to determine "mom's" voice from recordings, and further how the user interacts with "mom" from text messages and recordings. A photograph of "mom" may result in a display for the monitor of FIG. 2C.

Google may or may not choose to ever provide future robot owners with such robot personality options. But whatever the legal situation, such options will almost inevitably spark broader discussions among individual families and within society as a whole about resurrecting the dead in robotic form. "While an individual may find comfort in having a robot or digital double impersonate a deceased loved one, others may well find this creepy, and the practice could be stigmatized," MacDorman said.