Grigoriy Reshko has a solution for technophiles who feel their palmtop computers just aren't mobile enough. The Carnegie Mellon University student, working with computer scientist Matthew Mason and roboticist Illah Nourbakhsh, came up with a robot that attaches to a PalmPilot so it can get up and go all by itself. Reshko built a small, three-wheeled robot (below) and wrote software that lets the Palm's modest computing power steer the machinery in any direction. The robot has three infrared sensors that allow it to follow walls or track obstacles. When the user is done playing Mini-Terminator, the Palm readily unhooks so it can return to its more conventional tasks. Reshko hopes his invention will give ordinary folks a chance to share in his love of robotics. "The PalmPilot has a nice graphical screen, it's simple to use, and a lot of people have them," he says. Acroname Inc. of Boulder, Colorado, licensed the design and has begun selling it as a kit. The company revised the software so that tapping on a picture of a wheel on the Palm's screen makes the robot's actual wheel turn. Palm-bot users are adding refinements; one enthusiast wrote a program that instructs the robot to move along simple geometric paths. And Reshko is working on his own upgrades: "We've already tried to use the Palm to control a four-wheel-drive robot, and it works very nicely." 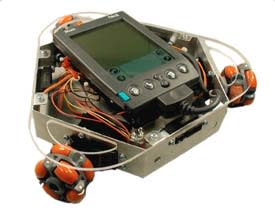